Hiking and radio at ‘The Prom’

It’s been three days since I got home from my trip to Wilson Promontory and my leg muscles are just returning to normal.

Before the trip I set myself two goals. These were to work 20 m and 80 m SSB from the most southern point on mainland Australia, a place called South Point, and also work 20 m SSB from the beach at the top of Oberon Bay. I also wanted to see how I went physically on a 30 km hike, carrying radio gear, camping gear, food and being totally self sufficient.

This trip would also be another activation of the Wilsons Promontory National Park for the Keith Roget Memorial National Park Award.

Hiking alone is not something that I would ever suggest anybody do, in fact with Scouts we mandate a minimum of five members in a hike party. However, on a long weekend at ‘the Prom’ one is never really alone. On both days I was hiking along the tracks with many day trippers and a few over night hikers. The day trippers stopped at the beach while the hikers kept walking on toward the over night camps.

The hike on the first day was quite taxing on me. Not only because of the weight of my pack, about 25 kg, but because of the warm temperatures for most of the day. The forecast had been for 18 degrees Celsius with occasional showers. What I got for most of Day One was high 20s to low 30s with little to no cloud. 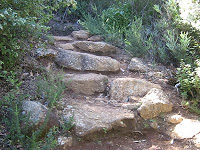 Progress was reasonable, walking at about 3 and 4 km per hour. I was taking short breaks in the occasional shade to make things more pleasant.

My original plan was to set off about 10 am from Norman Beach, pass Oberon Bay around midday and arrive at the Roaring Meg camp ground at about 4 pm. After setting my tent for the night I was going to keep hiking south and get to South Point about 6 pm and work 20 m and 80 m from South Point until abut 8:30 pm. 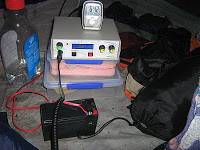 However the demands of the day saw me leaving Norman Beach at 10:20, stopping at Oberon Bay for lunch at 12:30 and then headed off toward Roaring Meg. Progress after Oberon Bay was slow as fatigue started to set in. There is a big hill that needs to be hiked up and over. It seemed as I was going up that the hill would never end. Before the top I found I was walking in low cloud soon followed by light rain. I arrived into Roaring Meg camp at 5:15 pm, wet, exhausted and in no mood to head to South Point. That part of the plan was just not going to happen.

I put up my tent in the rain, hung a rope and the 20 m / 80 m dipole from a tree in the rain and gave 20m a quick try. I heard a few stations on 20 m but was unable to get response to my CQ calls. As the sun went down I changed the antenna over to 80 m and swapped from the BITX20 to the MKARS80. I put out a couple of CQ calls but got no response. I left the rig on while I had some dinner and was pleasantly surprised when Mike, VK2IG, gave me a call. At the same time Peter, VK3YE, also called. So from nobody on 20 m I now had two stations on 80 m calling. The signals from both stations were very good. Later we were joined by David, VK3JDA, and a weak Peter, VK3AJ who was portable near Dargo. 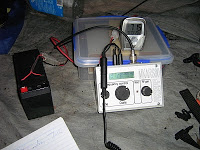 Peter, VK3YE, even went as far as to record some of the QSOs and place it on youtube. Later in the evening Peter, VK3YE called again on his double sideband QRP rig, Peter, VK3AJ, came up from a different location and Ron, VK3AFW, dropped in for a quick chat as well. There were electrical storms somewhere and the static noise was increasing as the night went on. About 8:40 pm I switched the MKARS80 rig off and tried to get some sleep. I say ‘tried’ as it was uncomfortable as I had not brought a mat to sleep on and I was getting cramps in my legs. 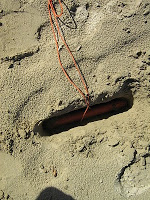 Next morning the rain had cleared and the day was looking cooler than the day before and pleasant for walking. I was hiking back along the same tracks as I came in on and planned to stop at Oberon Bay and give 20 m another go. I took the antenna down, packed my tent up and left camp just before 8 am, about 30 minutes after sunrise. By 11 am I was on the beach at Oberon Bay and went about setting up my 10m squid pole to support my 1/4 wave droopy ground plane for 20 m.

I dug a central hole for the base of the pole and used a cut down bottle to keep the sand out of the base. I buried four 300 mm lengths of orange PVC pipe about 100 mm deep and looped the guy ropes around them. This worked well and the pole stayed vertical. The antenna was attached and pegged out with three other pieces of orange pipe. It took just over 20 minutes to set the antenna up. 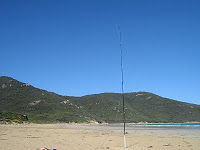 Using the BITX20 I listened around and found VK4KUS Steve on air. Steve and I had worked a couple of nights earlier and Steve had made me aware of a problem with my transmit audio. I had tried a couple of things to fix it but, as Steve told me on the first over ‘ Pete – you still have that audio problem.’ I’m not sure of the cause but I’ve got a few ides in mind. I also want to fit a new balanced mixer and a varicap / 10 turn pot tuning modification so I’ll fix the audio problem after that. 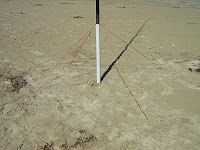 It was difficult to make contacts on 20 m with the audio problem. Phil, VK3JNI, called up just as I about to start packing up, and despite his best efforts with his Barret radio, he couldn’t make me sound legible. Phil described the audio as ‘FMing’. FMing means that in addition to amplitude modulation of  the single side band signal it is also shifting in frequency with modulation. This is often caused by discharged batteries but in my case there is something wrong with the rig.

After packing away the antenna, which took about 6 minutes, I continued on toward the end of the hike. I got back to Norman Beach car park just after 4 pm which was almost right on time.

My feet were sore, my calves were sore and my shoulders were sore, but I had achieved one of my aims, albeit not really that well, and I have another nine portable QRP contacts in my log book.

This entry was posted in BITX20, KRMNPA, MKARS80. Bookmark the permalink.

3 Responses to Hiking and radio at ‘The Prom’