Posted on December 30, 2011 by Peter Fraser
Yesterday I finally made it down to the Point Nepean National Park for the Keith Roget Memorial National Parks award.
Due to a few issues before I left home, heavy traffic and a longer set up time than expected I didn’t get on air until about 1:25 pm. I had previously posted to the Yahoo group that I would be on air from midday. 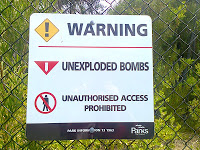 I arrived at the park information centre about 12:30 and had a talk to the counter staff and found that there are limited places to park the car inside the National Park and only four places to access the beach. Armed with a copy of the park notes, I drove in and parked at the Gun Junction car park. This car park is next to an area shown on the park notes as ‘Conservation area’. In fact it is an old bombing range from when the park was a military establishment and within the area may be some unexploded munitions.
From here it’s about 900 m walk, past the Quarantine Station and the old Hospital to the beach, I loaded up my gear in a back pack and headed off. 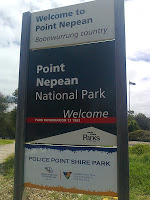 Once on the beach I started unpacking. Before I had even got all the gear from my back pack a Parks Victoria Ranger had parked nearby and walked casually on to the beach and over to me. He asked me what I was doing, I explained the antenna and the award and he was happy, headed off and left me alone. He was the only person I saw on the beach for the whole hour I was there.
Once set up I tried 40m but found I still have some more tuning to do on the switched inverted vee antenna and I was getting very little power into the air. I called a few times on 7.100 but got no response.
I then changed to 20m and called on 14.190 and got a response from Ian, VK5CZ. He gave me 5 x 5 and we talked for about 20 minutes about QRP portable and the award.
After success on 20m I tried 15 and 10m but, like 40m there were no takers.
There were a few stations on 15m, one JA station was quite strong, but I couldn’t get a break.
At about 2:15 I gave it away and by 2:30 I had the pack on my back and was heading back to the car.
One station in the log, one more park off my list and some sunburn on my lower legs.
73
This entry was posted in KRMNPA. Bookmark the permalink.