Following the announcement of the SOTA 12 metre challenge I posted about some things I needed to do to be able to participate.
I made a repair to the FT757 and now it outputs 50 Watts on both the 10 and 12 metre bands. 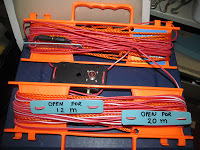 For my activating station I have made another linked dipole cut for 12, 20 and 40 metres. I used the same construction method as my other portable antenna which has served me well during activations for Keith Roget Memorial National Park Award, SOTA and many other portable operations.
After cutting the wires longer than required I went to the local park and set the new antenna up on my nine metre squid pole. I then trimmed each pair of wires using my Daiwa cross needle SWR meter and the recently repaired FT757.
All up it took about 90 minutes to tune the three bands with the occasional interruption from the dog walkers asking what I was doing.

Once tuned I took the antenna back into the workshop and soldered the RCA connectors in place and then it was ready to go.

The next day I took the new antenna to Mt Toorongo Range and made four QSOs on 12 m including one summit to summit QSO with Glenn, VK3YY.

I have now accepted the challenge!