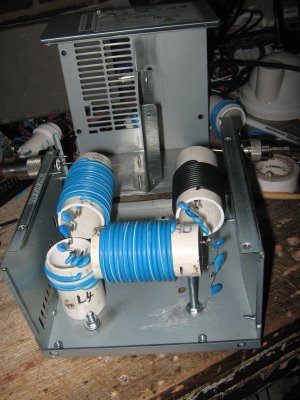 I’ve put my BITX 20 aside for a little while as I was getting frustrated trying to cure the audio feedback problem on PTT.

On the bench now is the first of five 100 Watt band pass filters.

I have decided that our multi-transmitter contest station would benefit from some filtering and the Nashoba Valley Amateur Radio Club’s ‘Ugly Filters‘ look like just the thing.

The filters are built in old PC power supply cases and use just coils and capacitors. The specifications met my needs so I have made a start.

I was well under way when I asked for donations of power supplies from the SRESU and got 8 within a couple of weeks.

I decided to start with the 40m filter as this is the band we had the most QSO on during the last multi- transmitter contest we ran so I’ve got a bit of time to spend getting it right.

The design looks simple enough but so far I have put about 30 hours into it and I am still getting poor performance. At first the pass band was around 9 MHz because I had the wrong diameter coil formers, then the insertion loss was too high. Then I smoked a capacitor during testing. I also found one of the capacitors was nowhere near the stated value.

At present I am replacing the stranded wire coils with solid wire coils- exactly as the article says.

Hopefully with this change and replacing the wrong capacitor all will be good.

To save cost I have again got my parts from Futurlec in Thailand. This reduced my cost by more than 50 %. I hope I don’t regret this if I find too many bad capacitors. I only ordered one extra of each value. I needed to change the combinations to get the required values and will use mostly series capacitors rather than parallel capacitors as recommended. This has nearly doubled the capacitor count but since I get them so cheep I am still in front. I hope.

This entry was posted in Amateur Radio, Contesting, SRESU. Bookmark the permalink.