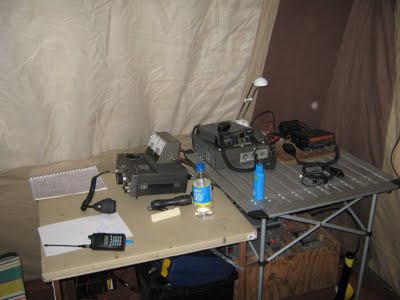 Well another Scouthike has been and gone. This one was different from so many others of late. This year it didn’t rain. Not a single drop. Not even a hint of moisture from above.

Of course, this meant our VHF radio net worked very well and we all had dry canvas when we got home.

It also meant that the amount of work to be done around the camp was reduced as there were no cold and wet scouts with leaking tents and wet sleeping bags. Everyone on our sleep point had a really good time.

We were at the same site back in 2000 and that year it rained so much the road in was impassable and the entire campsite was under 6 inches of mud. After about 2 hours there we gave up trying to keep the mud out of the tents.

No such problems this year.

I purchased a 16 ounce throw bag from an arborist’s supply store on Thursday and I was keen to try this out. My first couple of throws were not quite high enough but I managed to get the dipole flat, rather than inverted vee at a height of about 12 metres.

When checking the SWR on 80m I found it was about 3:1 at the bottom of the band and even worse at the top. This always means the antenna is too long so I pulled about 1 metre of wire through the insulator and twisted it back in itself. Now the SWR was 1.2:1.

I’m think the SWR problem was caused by me having the antenna flat rather than my usual inverted vee configuration.

Once on air I made a few QSO on 20m. Estonia, Russia, India, Dubai and Townsville. I didn’t have any luck on 40m with DX and 80m was used just for a quick chat with the other stations at the event.

I also strung up a dipole on 17m, a band I have not used before. I tuned around here and found ZL1TBA who was quite happy to chat and share his experiences with 18 MHz. Most interesting.

I called and listened around on 17m later in the day but nothing else was worked. A very quiet band indeed.

I had hoped to work the Easter Island DXpedition XR0Y during the weekend but I didn’t hear them at all. I was able to work the P29NI DXpedition from Papua New Guinea.

We also took along an old AWA25M VHF commercial radio that has been modified for 2m. We used this radio for the overnight shifts as it has very low standby current however the receiver is very deaf and needs repair.

I took some photos of wires in the air but it is really hard to make anything out so I’ll save the bandwidth and not uploaded them.

One Response to Scouthike 2009 – Update