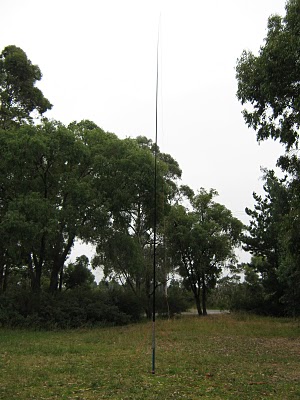 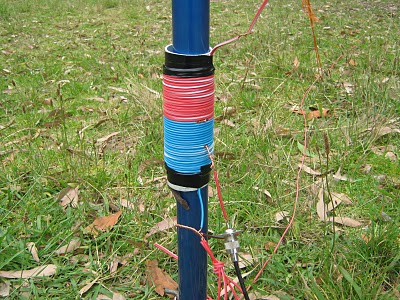 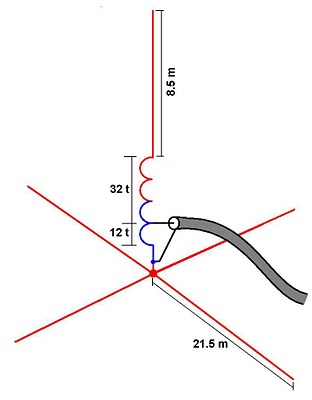 In preparation for our upcoming French Island trip, today I went to a park and made a 7 MHz 1/4 wave ground plane antenna supported by my 9 m squid pole.

The antenna is quite simply, a single vertical radiator with 4 radials laying in the ground. The vertical radiator is held up by the squid pole. I made a thumb knot in the top of the wire and slipped onto the top section of the pole.

The vertical radiator is 8.4m long and each radial is 10.5m long. I set these lengths up and checked the SWR and it was below 1.5:1 so I was happy with that. I gave a few CQ calls and Justin, VK2HAK, came back to me. We chatted for about 10 minutes and then Steve, VK7FSRC called up as well. Both stations were 5 X 9 copy although I was only 5 X 1 into Justin’s QTH and 5 X 7 to Hobart.

I know that the vertical radiator should be longer, say 10.5 m, but I can’t hold a wire that long on the squid pole, so 8.4 m will have to do for now. I could add a loading coil somewhere along the wire, perhaps in the middle or at the base and see if I can make the SWR better, but for now I will leave it as is.

Next task was to make a 3.5 MHz ground plane using the same radiator. I extended the radials to a total length of 21.5 m and added a series coil at the base of the radiator. I started out with 12 turns on a 40 mm former but that was no good. I then added another 12 turns but it only seemed to get worse.

I then went for 12 turns on a 60 mm former but still no success. I extended this to 40 turns by adding another piece of wire and winding 28 more turns. This just made things worse.

I then wondered what would happen if I was to connect the 12 turns between the coax centre and the coax outer, along with the ground plane, and then connect the 28 turns to the radiator. This, finally, gave me and SWR of 3:1 on 3.600 MHz and 1.1:1 on 3.795 MHz. This was a good sign but since I wanted the lower portion of the band I needed to add some more turns. I jumped to 40 turns on the radiator and worked my way back from there.

I called CQ but, as it was mid afternoon, I got no response. I tried again later in the evening but an incoming electrical storm meant the 80 m band was just S9 + 20 dB of noise, crashes and static.

I will try 80 m again in the morning if the weather has improved.

One Response to 40m & 80m ground planes and a squid pole