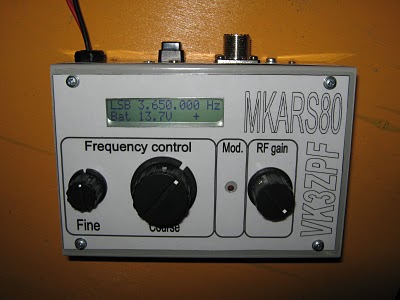 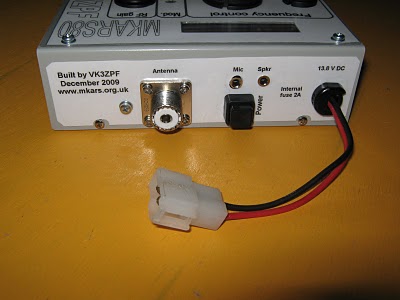 Having now finished with the hike to French Island I was able to turn my attention back to my MKARS80 QRP radio kit.

A couple of days before the French Island trip I hooked my MKARS80 up to my PSK software and generated a single audio tone into the microphone. I was able to measure just over 5 Watts output into a dummy load. However on the microphone it is difficult to get much more than 2 Watts output.

I will try adding a microphone pre-amplifier. As I am planning to use a speaker microphone with the radio I will also need to do the same modification as I did to my BITX 20. The addition of another relay to disconnect the speaker upon PTT is required to stop the audio feedback that currently occurs when I use the speaker microphone.

Over the last couple of days I have been playing around with the front and side panel designs and have got a working solution in place now. I am still having issues around the placement of the two 3.5mm audio sockets as I have just worked out that they are not on the same centres from the board edge. One is slightly higher that the other. For now I have just made the microphone hole slightly larger but when next I make a side panel I will move the speaker socket and get them the same height and then the holes will fit tightly.

I must admit that after the mess I made of the side panel before I am quite pleased with how it now looks. The panels are made from paper that I printed in my ink jet printer then, after using a hole punch for the MOD LED and a Stanley knife for the display cut out, I laminated and then trimmed to size. I have filed down the MOD LED so it is flat against the front panel rather than poking through as it was earlier.

There has been some talk from another VK amateur of building a MKARS40 and, if that happens, I might just build one of them as well. That would give me three light weight QRP rigs to choose from when next I go hiking.