The (not so) great squid pole muster 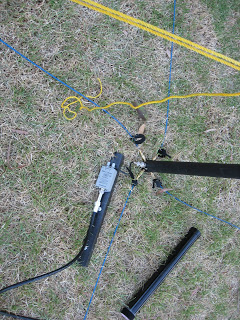 Last Monday was our regular SRESU meeting and Peter VK3AJ had suggested those with squid pole antennas bring them along to show off to others. 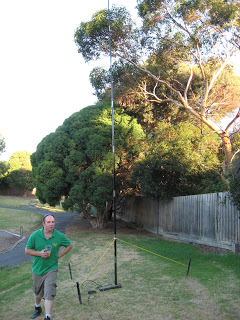 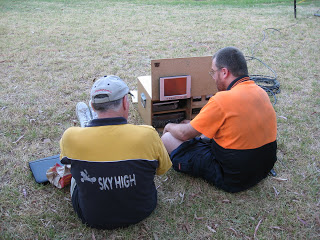 I got to the hall around 6:30 pm and set up my usual 20/40m trapped ground plane. Shortly after Peter VK3AJ set up his 10m pole, also in a ground plane configuration. Peter, unlike me, figures he doesn’t need to keep things small as he has a car to take gear where it needs to go.

His pole is fully rigged with three guy ropes held in with steel star pickets driven with a sizable hammer. His pole has four radials connected with gold plated RCA connectors. Peter uses a 4:1 balun and tunes the antenna with the internal tuner in his Kenwood TS2000. Quite an impressive set up for portable use.

Peter was the only other pole user to show off his antenna but there was 9 or 10 interested onlookers from the unit there.

Phil, VK3JNI, has recently shipped 24 ten metre squid poles to unit members and friends so hopefully the F.A.R.T. camp in March will see some more poles out and about.

While I had my pole in the air I gave my newest antenna a try. It is a half wave vertical dipole for 2m made only from coax. Using a borrowed rig I was able to access many repeaters on 2m so it must have been working well. My plan is to build a two or three section colinear antenna for 2m using a 10m squid pole as the support. I have not built colinear type antennas before so this should be an interesting exercise.

One Response to The (not so) great squid pole muster