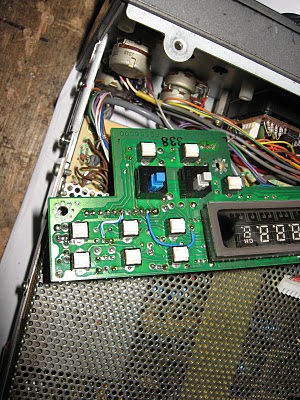 Yesterday I had finally had enough of the display problem with the Yaesu FT757 and hopefully I have now fixed it.

By way of explanation, the FT757 is on loan from a friend of mine. When my friend got the radio it was thrown in as part of an antenna and tower deal. The radio didn’t work very well at all and had numerous faults. Looking at the missing cover screws and the damage to the screws that were left, it would be fair to presume that somebody had tried to make repairs.

Over the past couple of years I have been working to get this radio back to its former glory. First up I replaced the internal memory back up battery and realigned one or two of the oscillators. This cured most of the problems but it still had a very annoying, intermittent fault where the display would fail and either show only even numbers, so 3.575 would be shown as 4.686 or something similar. At other times the display would go very bright and show all 8s. Annoying to say the least.

I had previously identified that there was a problem with the 11 way cable that connects from the display board to the main board. It seamed that when I applied pressure to the cable, near the display board, I could make the fault come and go.

I had a look at the soldering on the display board and found what looked like dry solder joints. I re-soldered the connector and, for a while it worked.

After the disappointment of the 2009 JMFD contest, where I couldn’t work 160m due to this fault, I had another crack at fixing the fault. This time I thought I had found the problem with a second cable behind the display. I carefully bent the display up and re-soldered the connector there as well.

The problem stayed away for a few months but still came back at the worst possible time.

So yesterday, when it failed while I was tuning around looking for VK100WIA, I resolved to take it apart again and have another go.

This time I again checked the soldering on the header connector to the display board and I used the continuity tester on my multi meter to verify the contacts. I was checking from the main board connector to the solder pads on the board. I checked each of the 11 connections and, even when moving the cable and connector, I couldn’t make it fail. Then I started again checking each wire from the far end to somewhere on the circuit board where the copper traces ran to. This, I hoped, might show any breaks in the board or similar. The second wire I checked, pin 10, showed some unreliable contact so I ran a short length of wire between the connector and a PCB pad it was supposed to be connected to. This made the connection more reliable.

Pins 11, 9, 8 and 7 tested fine, as did pins 5 to 1. But I couldn’t find where pin 6 connected to. There are no copper traces from pin 6 on the underside of the board and the trace on the top side didn’t appear to connect to pin 6.

I had a look at the circuit diagram and pin 6 is connected to the main chip and three diodes so it had to be connected somehow. I took a look at the board overlay in the service manual and it showed me a track on the top side from pin 6 to the diode D19.

I connected my tester between the far end connector and the anode of D19 and there was no continuity. I pressed on the header body and I got a beep from the tester. I let go and the beep stopped. There was a break in the circuit between the pin of the header connector and the copper trace on the top side of the board. A very clean break too. Without too much effort I was able to make the tester sound my call sign in Morse code by pressing and releasing the header.

As I had done with pin 10, I now ran a wire from pin 6 of the header connector to the PCB trace going to the anode of D19. This proved to work as the tester now showed 100% connectivity.

I reassembled that radio and the display works fine. Let’s hope it stays that way.

The radio still needs some more alignment as the IF shift and width controls are not good, and the VOX doesn’t work, and it seams very deaf on 10m, but these things can wait until another rainy day.