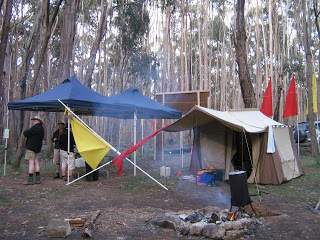 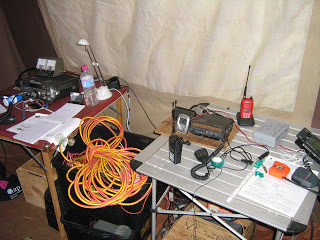 The weekend before last was the annual Scouthike competition hike for scouts. My eldest son Ash, VK3FASH, and I again set up a station at Sleep Point 6. Our sleep point had about 45 scouts staying in tents each night.

Our station consisted of my TM742A, running as a cross band repeater between 2m and 70cm, and a couple of 70 cm handhelds. For HF I had the tired FT-757GX and the even more tired FT-7 as a back up rig. I also had my MKARS80 along and worked a couple of stations on it as well. Having the TM742A running cross band allowed Ash and I to move freely around the camp area and still work Q5 back into VK3RSR, the SRESU‘s portable two metre repeater. I have been using cross band at these events for the past 10 or so years and it really is the best way to work and be sociable with others in the camp. We also had a UHF CB radio. DC power came from two 120 Amp-hour sealed lead acid batteries that were topped up when the site’s generator was running.

The communications network is run by the HQ station, VK3SAA, and, this was staffed by Hayden, VK3FRST, Gerard, VK3FGCP, Arthur VK3FBEE and Kent VK3TER. Even Heather VK3FGCL got on the mike at one stage.

We had a little bit of trouble with the VK3RSR repeater, again, similar to the troubles we had at the bike event a few weeks earlier. Hopefully Peter, VK3AJ, can figure what is wrong and fix it before the next event.

For antennas we used the usual trapped 20/40/80 dipole strung in the trees at about 8 metres. Our 2m/70cm antenna was a Diamond X-200 fastened to the check-in shelter. I also had another try at building an 80m ground plane using my 9m squid pole.

At first I tried winding 21 m of wire around the pole but this wouldn’t tune in at all well. Then I added a base loading coil and kept adding turns until the SWR came down. I got about 1.2:1 and gave it a try. I found it was usually 4 S points worse on receive and transmit was not much better. This was similar to my tests back in January.

On Saturday night was the first Papakura Sprint. The Papakura Radio club has added two more one hour sprints to the VK-ZL calendar and judging by the response on Saturday night they are on a winner. I worked the full 60 minutes without interruption and made 42 QSO. When I got home and transferred the log from paper to PC I found I had made two duplicate contacts. Sorry to the two stations I copied twice.

The Papakura Radio club are running another sprint in the middle of February 2011. If the weather is not too hot and the fire danger is not too high then I might head up to Mt Donna Buang and stretch out a half-wave sloper from the 21 metre high observation tower angled toward ZL.

I didn’t get much on HF outside of the sprint but I did add a couple of Ukrainian stations to the log.

Next contest is the JIDX phone contest.

This entry was posted in Contesting, SRESU. Bookmark the permalink.

One Response to Scouthike and Papakura Sprint