I’ve just gotten home from the ARV Centre Victorian RadioFest and I must say it was a good day out. I got to catch up with Tony, VK3VTH, and quite a few other hams that I had met previously. The table I was helping out on was promoting the Keith Roget Memorial National Parks Award and selling ARV log books.

Tony was also distributing info about the National Parks award to the attendees of the mini-lecture series that was being held upstairs, above the madness that was the second hand goods stalls.

Talking of the secondhand goods, I went for a look about 2 hours after the sales had started and the word ‘goods’ would be an overstatement. If there was anything good to be had in the junk sales it had surely gone long before I got there. Such an assortment of largely useless junk I have not seen, well, since the last hamfest I went to. If I may misquote Hermann Hesse, “One man’s trash is another man’s treasure”. On that basis there must have been some real gems in there.

There was one stall selling kitchen utensils and another selling jazz CDs. Not too sure about the link to ham radio but I guess you could use a knife as a Uda array element and a CD would make a cute rainbow coloured insulator for a dipole.

I didn’t have a look at the commercial sales area but I would guess there was plenty of lovely shiny boxes that I couldn’t afford begging me to take them home.

Everything at the Radiofest was well organised and, apart from some problems with the PA system, it all ran smoothly. 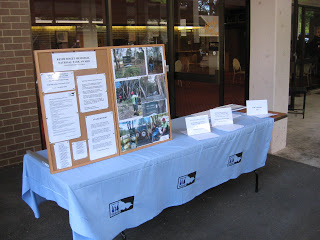 The display table I was on got some interest in the award and I’m guessing we will have another two or three members of the Yahoo Group soon.

I’m already looking forward to the next hamfest where we can promote the award a little more.

Perhaps next time I will take a hike pack, tent and squid pole antenna to add to the effect.