This is a new section to my blog where I will detail what is currently on the work bench. It may be a kit under construction, a radio under repair or some dust from inactivity. Whatever it is, if it’s on the bench and worthy of publishing, this is the title under which it will be found.

During the recent JMFD contest I found the intermittent audio failure had returned to my Yaesu FT-7. This issue first showed back in 2009 but of late has not been a problem. 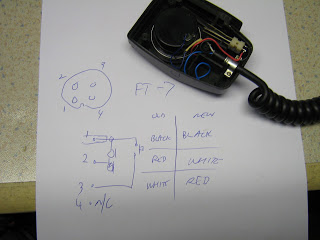 I had tracked the problem to a faulty wire in the curly cord between the plug and the microphone. During the JMFD I found I could cure the problem by holding the cable around the microphone body and pulling it in a particular direction. If I got it right then I could see the power meter move up and down, if I got it wrong then nothing went out.

So I had finally had enough of this and spent a couple of hours yesterday replacing the curly cable and plug.

The operation was a success and now, once I fix an annoying board contacts problem, the FT-7 will continue to deliver outstanding service for many more years.

This entry was posted in FT7. Bookmark the permalink.