Being dissatisfied with the excessive distortion of the microphone amplifier in my BITX20 I sought out an alternate amplifier. I checked the Jaycar website to see what op-amps were readily available and then Goggled the NE5534.

I got an easy looking circuit on Andy Collinson’s Circuit Exchange International site. Apart from the NE5534 I had everything else in the parts boxes already. I have substituted 33 uF for the 1 uF output capacitor. I’ll see if this is a good idea when I check the frequency response of the transmitter later. It may be giving me too much low end response. 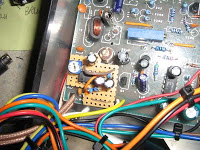 I built the circuit on a piece of unclad punched laminate and carefully positioned the components so the input, output and power connections could be directly soldered into the existing holes on my BITX20 circuit board. I also included the 1uF capacitor from the receive circuit on the board.

Once powered the amplifier worked first time. This has revealed a further problem with my BITX20 where the VCO is moving +/- 200Hz as I modulate the transmitter to 4 Watts but I’ll deal with that later.

One Response to Watts on the bench #6 – BITX20 microphone amplifier