Back to the Prom – again

I’m going to have another go at working from the most southern point on mainland Australia. Planning is well underway for a return trip to Wilsons Promontory in late April 2012.

My earlier attempt to work from the most southern point on mainland Australia was not successful and I have waited a full year to try again. The wait was not entirely my choice as a couple of weeks after my last trip there was a massive storm at the Prom and a significant amount of damage was done to the park. Even the bridge on the main road in was damaged with cars, buses and people stuck on the wrong side for days.

The northern parts of the park were re-opened later in 2011 but the southern area hikes, and of course South Point, remain closed until 30March 2012. Even after this opening some tracks in the south remain closed. This includes part of Telegraph Track, my preferred route to South Point.
At present I have 5 other hikers, all hams, who have said they want to come along for 3 days of hiking. Unlike my previous attempt I have allowed a whole day for the trip from Roaring Meg to South Point and return. 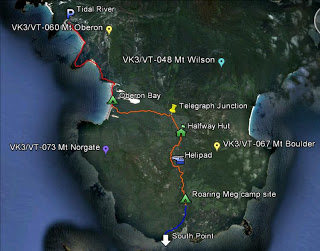 Because of the closure of Telegraph Track we will need to hike in from Oberon Bay. This is the same route I took last time. What I remember most from that trip is going up and down two peaks on rocks formed like giant steps and a long walk up, over and down another hill. I have plotted the hike route in Google Earth and prepared elevation plots showing the rise and fall. From the Tidal River car park we start at 12 m above sea level, climb up to 72 m ASL, down to zero, up to 68 m ASL, back down to zero, up to 273 m ASL and down to zero at South Point. This makes it an interesting hike as the terrain varies greatly from views out over Bass Strait toward Tasmania to typical Australian bush. There are four SOTA summits that we pass along the way but there doesn’t seem to be an easy way in so they will have to go unactivated for now.