Posted on April 26, 2012 by Peter Fraser
Last weekend, along with four other hams, I was fortunate enough to activate the Wilsons Promontory National Park on three separate occasions. 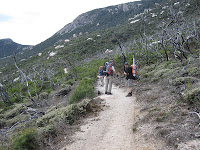 The plan for the weekend involved hiking to the Roaring Meg camp site on Friday, hiking out to South Point on Saturday for our first activation, returning to Roaring Meg for the second activation on Saturday night then stopping at Oberon Bay for the third activation on the way out on Sunday. With these three activation we were providing plenty of opportunities for contacts toward the Keith Roget Memorial National Parks Award.

Day 1. After meeting up at Narre Warren South we drove two cars to the Prom. We started hiking at 9:40 am along Norman Beach toward Oberon Bay. The hike into Roaring Meg was challenging for almost all the group. Wayne is a regular hiker and the hike up the final hill was like a walk in the park for him. I can’t say the same for Glenn or I as the hike up from about 20 m ASL to 270 m ASL proved to be quite taxing after two smaller climbs earlier in the day. With persistence Glenn and I made it in to camp just before 4 pm.

The first evening was fairly uneventful, with exception of a local possum who helped himself to my breakfast cereal. Lesson 1 – never leave the tent door open. The possum was hurried out of the tent and later seen up a nearby tree. The rest of the evening involved cooking dinner and swapping stories around logs arranged like a fire circle. There was no fire however as fires are banned at the Prom.

We all retired to bed about 8:30 pm to rest up before the next day’s hiking. My usual nightly cramps arrived about 9 pm and I was back to sleep about 9:30 pm.

I had chosen not to run any radio this night as I wanted to be sure those chasing the National Park for the award would be keen to work us once we were at South Point.

Day 2. Saturday morning we were all up by 7 am and breakfast was had. Fortunately the possum had not got too far into my cereal. We headed off to South Point, leaving our tents all zipped up, just after 8 am. It was a little overcast but pleasant hiking weather. 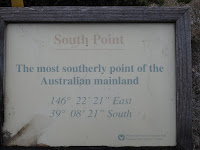 Wayne had headed off before the rest of us and was busy setting his antenna when we arrived.
Wayne was using his vertical antenna with 8 radials and tuner, Glenn was using two random lengths of wire and a tuner while I was using my now standard switchable inverted vee antenna.
We had 3 FT817s and between us we made 25 QSOs across 10, 15, 17, 20 and 40m SSB and CW. Contacts were shared, albeit not evenly, among all operators. 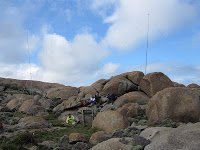 After a very successful first activation at 3 pm we packed away the antennas and radio gear and headed back to camp. Back at Roaring Meg Wayne and I set our antennas back up ready for the Saturday evening activation. We were joined later by another two hikers, one of whom politely asked what were we doing. After dinner  Wayne and I were on air a little ahead of the planned sked and made 13 QSOs across 40 and 80 m. We turned in for the night at about 8 pm and drifted off to sleep to the beautiful (?) sounds of a ukulele. 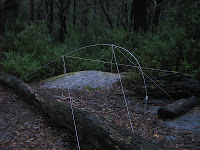 Day 3. At about 4 am an electrical storm passed over and dumped a fair amount of rain. During the storm Wayne’s vertical bent over like a banana and my squid pole collapsed back into itself. No significant damage was done but it should serve as a reminder not to leave portable antennas up when not using them. I didn’t get any water in my tent unlike Wayne who had set his tent on a nice flat pad, that fills with water when it rained. Still we were heading home so this was just a minor inconvenience.
We packed up our camp and headed off just after 8:30 am. Wayne, Kevin and Trevor were a little quicker up the hill than Glenn and I and they made good time to Oberon Bay. By the time Glenn and I arrived Wayne was ready to call. I set my squid pole and antenna up and we worked a further 18 QSOs from the Oberon Bay camp ground. Glenn set off ahead of the main group and we all met up again, for a team photo, at the south end of Norman Beach.
By 3:30 pm we were back at the cars and, after a quick snack from the take way food shop, we were on our way back to Narre Warren South. The journey back was interrupted by a brief discussion with the local police over a late bill payment and another big thunder storm that reduced visibility to about 30 meters. I’m sure glad we weren’t hiking in that.
Once back in the comfort of Kevin’s home we swapped photos and then went on our way. All pleased that the weekend had worked out so well.
By the end of the trip we had hiked about 42 km. We made a total of 65 QSOs, both CW and SSB, across all 5 operators with contacts on 80, 40, 20, 17, 15 and 10 m, Despite our best efforts we couldn’t get any stations beyond VK or ZL. We worked stations in VK1, 2, 3, 5, 6, 7 and 8 and ZL1, 2, 3 and 4. Very strange that we worked no VK4 stations.
Thanks to Glenn, Kevin, Trevor and Wayne for coming along and we must do it again soon. Wayne tells me there are over 600 SOTAs that we can choose from.
73
This entry was posted in Amateur Radio. Bookmark the permalink.