The Wireless Institute of Australia gains a member

So, after a break of about 23 years I have re-joined the WIA. I thought about doing this a few years back when the WIA and ACMA introduced the Foundation licence class. I saw this as a positive move to boost operator numbers. Apart from that I really didn’t see much else in it for me. 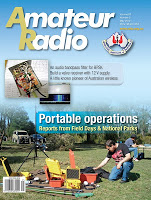 So, what’s changed since then? Not a lot really. I have become a little more active on HF and I am making good use of the WIA QSL bureau through Amateur Radio Victoria so perhaps paying a little more toward the QSL bureau is a good thing. WIA promoting the ongoing development of new bands and protection of existing bands is a worthwhile reason to belong but these things aren’t really enough. Knowing two of the WIA directors personally may have been a good enough reason if I was after something.

The thing that finally convinced me to join was the May 2012 Amateur Radio magazine.

Crikey, if they are kind enough to put me on the front cover then the least I can do is support them.

This entry was posted in Amateur Radio, KRMNPA. Bookmark the permalink.