Last Sunday I got up early and headed off to activate SOTA summit VK3/VT-040 Spion Kopje. This summit name has a typo on the VK3 summit list and is shown as Spion Kipje. Either way the pronunciation of this summit is not as it seems. It is pronounced as SPee on KEE op. 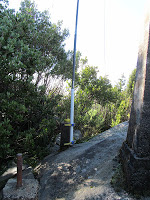 The overnight temperature was about 7 degrees but the forecast was for a top of 22 degrees. The drive to the base was easy going with the road in well-formed and only the occasional water filled hole. Nothing too deep.

Access to the base is via Limberlost Rd which heads south from the Yarra Junction – Noojee Rd, about 12 km from Noojee.

The start of the ‘track’ to the summit is about 30 metres west of the junction of Limberlost Rd and Outlook Rd.

The ‘track’ up is easy to pick for the first 300 metres or so and then it just disappears into the scrub.

The ‘track’ is very overgrown and makes its way up and over some big pieces of granite where it is difficult to tell where the ‘track’ enters and exits. In places it is marked with blue tape in the trees and occasionally red or orange paint on the rocks. 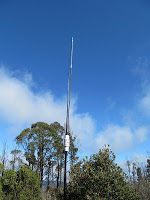 Despite all of this it took only twenty minutes to get from the base to the summit.

Once on the summit setting the inverted vee was a challenge as the steep edges of the summit and the heavy growth made me wish I had brought up a vertical. Things may have been easier just a little lower down but working right on top, even when you don’t need to, has a certain attraction to it.

I managed to get the inverted vee in the air and set for 40 metres but 15 minutes of calling got no results. I later learned of a geomagnetic storm that had caused propagation on 40 metres to be poor. Many stations had reported poor to no signals on Saturday and Sunday.

As Glenn, VK3YY, was also out on a SOTA activation, I had packed a 2 metre antenna as well. I put up the end fed vertical dipole on a second pole and gave 146.500 a few calls. I quickly had three QSOs on 2 m FM and then, after a tip off from Peter, VK3PF, I caught Glenn at Federation Range on 40 m. That gave me four QSOs before the UTC day change as well as some chaser points from Glenn. 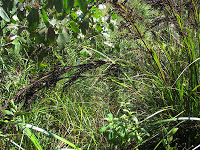 Given the poor conditions on 40 m I pulled down the inverted vee and, just after 0000 UTC I made second contacts with VK3PF and VK3YY on 2 m and then packed the station away.
The 2m antenna is based on an antenna described by Mark VK3ZR.
I was going to stay on the summit longer and work some other bands and hopefully Paul VK5PAS on his first activation, but with conditions how they were I didn’t see the point. I had also been reminded by my XYL of our newest niece and perhaps we might go visiting. As it was Paul didn’t make it out to the summits and suffered an antenna breakage in the backyard.
Only 14 minutes from summit to base. It was much easier heading down than up because the track was easier to find.
Next weekend is the Jamboree On The Air so I’ll be swapping SOTA for JOTA and QRP for big antennas and 100 Watts. I’ll be working from VK3SCG and am hoping for some good contacts for the Scouts that are in camp.
73
This entry was posted in SOTA. Bookmark the permalink.