My KRMNPA weekend started on Friday night with the first stop being the Hammer St cafe in Bendigo. The cafe is owned and run by Greg, an old scouting friend of mine. I hadn’t seen Greg for a couple of years and it was good to catch up with him for a while. If you are ever going through Bendigo it is well worth the detour. Good people and great food.

From Bendigo I continued heading north and arrived at my first National Park, Terrick Terrick, a little after 8 pm. The camping ground is small and there was already two other camps set up. I quickly set my tent and then went off to find somewhere else to set up for my first activation. 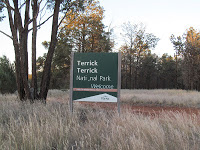 Choosing a quiet spot on Cemetery Rd I put the inverted vee antenna on the 10 m squid pole, set up the FT757, put out a call on 40 metres and got no response. I tried a few times but things with the radio just didn’t seem right. The FT757 has had a few problems over time and it looked like this weekend it was going to play up again. I packed the FT757 away and moved to the FT817, smaller rig with only 5 Watts output. Looked like the weekend was going to be QRP.  I worked a 4 stations before heading back to camp for the night.
Up early on Saturday morning I packed the car and headed off to another spot in the Park to try my luck on 20 metres. Here I threw a rope in a tree and hung the antenna from the branch. Using the FT817 I called CQ but got no response. I moved frequency a little and same result. I tuned around and heard a station 5R8UI calling CQ with few stations coming back. Running only 5 Watts I didn’t think I would get through but I gave a call and he repeated part of my call sign. This was a good start and suggested that with perseverance, from him and me, I may be able to get a contact. Over the next 2 or 3 minutes we swapped back and forth until he confirmed my call sign and signal report, 59 of course, and the QSO was made. Mike 5R8UI was operating from Nosy Be Island off the coast of Madagascar. I was pretty happy with this contact considering I was running only 5 Watts into a simple inverted vee, hanging in a tree. 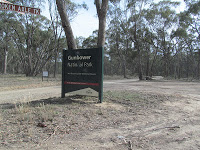 From Terrick Terrick I headed off to Gunbower National Park. The Gunbower National Park run alongside the Murray River and stretches for about 26 km. Tony, VK3VTH, and his wife Cheryl were also planning to activate the park during the day. I set up just inside one of the entrances so if Tony came in there he would have no trouble finding me. I made 7 QSOs on 40 metres, one of which was with Tony who had set up in a different part of the Park. After working all available stations I headed up the road a bit and caught up with Tony and Cheryl.

After a pleasant chat with them I got back on the road, heading for the Lower Goulburn National Park.

At Lower Goulburn I again used the squid pole as a support for the antenna and worked 9 stations on 40 metres and one on 20 metres. A few of the stations worked had worked me in the previous parks and the list of Park chasers was increasing. This was a pleasing sign as interest in the award seemed to be spreading as the day went on. I was also increasing my count of National Parks I had worked to as other stations activated those Parks. I also caught up with Peter, VK3PF, who was activating SOTA summit Granite Peak, also in the Alfred National Park. 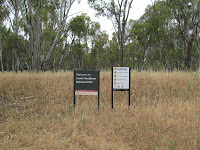 From Lower Goulburn I went to Barmah National Park, the last Park of 45 for me to activate. Here I found a camp site away from others and strung the antenna in a tree for the night. I worked 15 stations before turning in. Waking early in the morning I tuned around on 20 metres hoping to find some more rare DX and tried my luck with V84SMD.  V84SMD was a DXpedition to Brunei. After a few calls it was obvious that 5 Watts was not going to make it with this station. I swapped the FT817 for the FT757 and tried again. Straight away the rig worked as it should and the contact was made. Sometimes just a little more power can make all the difference. 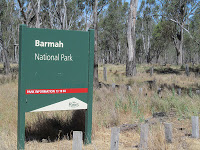 From Barmah National Park I headed off to look over the Hoadley Hide site ahead of next year’s event. On the way I stopped by Mt Ida in the Heathcote – Graytown National Park to check access to the car park. I had a few minutes to spare so I also tuned up a new end fed coaxial dipole. After the Hoadley Hide site visit I went back to Mt Ida and walked up to the summit for a SOTA activation.

Whilst setting the antenna my 10 metre squid pole split at the top of one of the lower sections and became much shorter than before. I put the antenna on what I could of the pole and was fortunate enough to work four QSOs to claim the activation point. I tried working Allen, VK3HRA, who was also on a summit in a National Park, but I was unable to hear him over the local noise. I thought if I could lift the antenna higher then I might just be able to make the QSO. 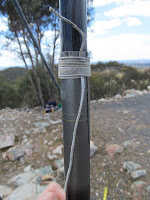 After looking over the damaged section I went searching for something that may have been able to help me repair it. There are two towers on the summit and I was thinking maybe a cable tie had been left behind. No such luck but I did find a piece of cord. Remembering my scout training I quickly made a whipping around the split section of pole. It worked and so the pole, and the antenna, were now back to full height.
I gave Allen another call and made the summit to summit National Park to National Park contact. 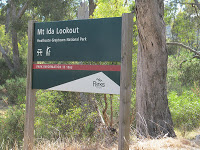 As I was driving back to town I was thinking about where else I could go the activate a Park. My choices were Organ Pipes, Kinglake or Churchill. The first two were too far out of the way but Churchill, being the closest National Park to my home, would work well.
When I arrived at Churchill National Park the main gates were locked and only the pedestrian entrance was available. No problem, I grabbed the FT817 box, the antenna and pole and walked in to the picnic area. I had the antenna up and on air quickly and just caught Allen again from a different summit as he was about to go clear. Another SOTA chased. After making six QSOs from Churchill National Park I packed up and went home. 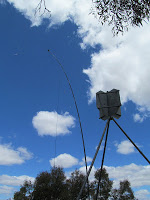 So, at the end of the weekend I had activated six National Park, completing the activation of all 45, activated one SOTA summit, chased three SOTA summits, and worked into eight other National Parks. I had made 55 QSOs, including two rare DX locations, with 53 of the QSOs being QRP.

What’s next? I’m now trying to chase all 45 National Parks, relying on others to activate them, and also looking to activate all 45 Parks at QRP power. This means I will have to visit a lot of them again but many of them have SOTA peaks so there is good reason for it.

This entry was posted in KRMNPA, SOTA. Bookmark the permalink.