Last Sunday saw me over west of Melbourne for reasons other than radio, my wife was at a conference and I had offered to drive here there and back

Having seven hours to fill between drop off and pick gave me good reason to hunt down some SOTA summits and work a few stations.

My initial plans were to activate three summits briefly and return just in time however the conference was finishing earlier than I had first thought so I cut it down to two longer activations. I arrived back at the conference venue with 10 minutes to spare. 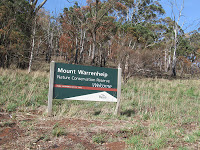 This was the first summit for the day. I had been to this hill many times before to work on equipment and antennas. Firstly as a young apprentice in my first job and more recently as a technician in my current job.

Access to Mt Warrenheip is pretty easy. From Melbourne, drive toward Ballarat, turn left toward Kryal Castle and then follow the road behind the castle to the top. 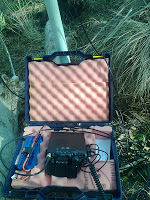 I had hoped to park at the bottom of the hill and walk up but, apart from the staff car park at the castle there is nowhere safe to park at the base. So I drove to the top and parked next to the trig point. From here I loaded all my gear in the pack and walked down the power line track back to the road. Dropped about 55 metres in elevation along the way. A recent fire has cleaned out the under growth, and about 50 % of the trees, on the north est side of the mountain. The walk back up the track was steeper than I expected. Strange how it always seems steeper on the way back. 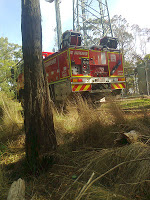 Back on the summit I set up just behind the old SEC tower. I strapped the squid pole to a log and soon we were on air. Contacts came quickly with summit to summit contacts with Ian VK1DI at Isaacs Ridge, Kevin VK3KAB at Mt Beenak and Al VK1RX at Mt Coree.I also made contact with Peter VK3YE who was pedestrian mobile at the beach near Chelsea. Peter has posted a video on You Tube of his morning out including a couple of my QSOs.

Toward the end of my activation I was joined by the local fire brigade who were doing a Sunday drive around. They drove past me and along the ridge a little, turned around and came back past me. They didn’t stop or ask what I was doing. After about 30 minutes I had 16 QSOs in my SOTA logger so I packed it all away and head off to Mt Buninyong. 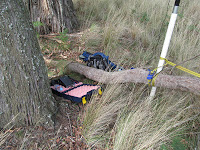 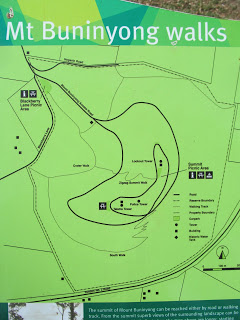 The second summit for the day is about  9 km away from Mt Warrenheip. A short drive through the valley between them. Here I was able to park at the car park at the foot of the hill and followed Crater Walk around a volcanic crater. Then I took Zig Zag track to the summit. Once on the summit I looked at the observation tower and the bus load of tourists having lunch and decided I’d head to the other end of the ridge. Again setting up near some radio towers I was on air and the QSOs were there again. No summit to summit contacts this time but I did manage another QSO with Peter VK3YE at the beach and a few call signs that were unfamiliar to me. 27 QSOs in just under an hour. SOTA in Australia is getting quite a following.

One station I didn’t get to work was Wayne VK3WAM. He sent me a text message asking to try 144 MHz SSB but I had already packed up and was walking off the hill. Hopefully I can return the favour to Wayne from another summit as I have scored many chaser points from the 35 summits I have worked Wayne on during his activations over the past 15 months.