I like to get out every couple of weeks and activate a SOTA summit just to keep my activator score ticking along. I’m unlikely to catch Wayne, VK3WAM, any time soon but it gets me out of the house into the fresh air and some magnificent views. 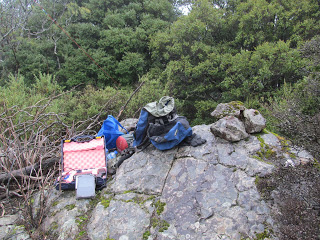 On Sunday morning I had a site visit for a Scouting event a bit to the east of home so I picked the nearest hill that I had not worked, VK3/VT-026, Mt Toorongo Range, to activate.
The drive in is nearly all on bitumen roads passing through towns such as Neerim South, Nerrim Junction, Piedmont and Noojee before turning left off the Baw Baw Tourist Rd just before Tanjil Bren.

As I was passing through Noojee I spotted fellow activator Kevin, VK3KAB, who had stopped for lunch on his way to VK3/VT-040 Spion Kopje. Kevin had just activated VK3/VT-039 MacArthur Spur and looked quite wet for his effort.

Following the directions of Glenn, VK3YY, I found the road to the summit. I drove back and forth past the closest point a couple of times looking where it would be best to park. I settled on a road junction about one kilometre from the access point.

As I walked back to the access point I noticed two or three spots where the track was wide enough to park, just, but parking always looks better when you are not in the car. From the road there is a break in the trees with some rocks and small shrubs leading up to the summit. I made my way carefully up the hill, following tracks of animals or previous activators until I arrived at the top. 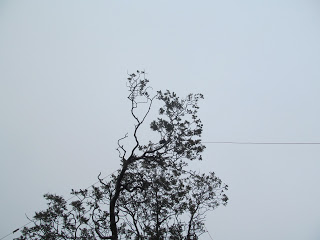 The summit has a large rock with some low wind swept trees surrounding it. It was one of these little trees that provided the support for my new 12/20/40 metre linked dipole antenna. I had not taken my squid pole to the summit and has to settle for the antenna being only 3.5 metres off the ground. The summit was surrounded in low cloud and visibility was around 200 metres. no view to be seen from here today.
Once set up I tried calling on 12 metres but I got no replies. I then moved to 40 m and dropped in on Kevin, VK3KAB and Allen, VK3HRA, with Allen saying he was about to go. I broke in, worked Allen and Kevin and then moved frequency to work the pack that had formed. After finishing the dog pile I announced that I was moving to 12 metres and there I worked four stations, my first contacts ever on 12 metres.

Returning to 40 metres I worked one more station and then, with very light rain falling, I packed up and retuned to the car.

On the way home I pulled the car over a couple of times and worked John, VK5BJE, and Paul, VK5PAS, who were both activating National Parks for the South Australia National Park & Conservation Park  Award. I also made a second contact with Kevin, VK3KAB, who had stopped by VK3/VT-078 Gentle Annie on his way home.