It has been quite some time since I last posted on this blog but things have been very chaotic around here of late. Between gardening, JOTA, my cousin’s wedding and a few other things there has been little time left for radio. I did manage to squeeze a small effort at the OCDX contest but the results will show that it was far from competitive.

To top all this off there has been a major change at my work with a large customer moving their business elsewhere leaving me now looking for a job.

However, in among all that I did manage to get out last weekend and revisit SOTA summit VK3/VC-028, Dingo Ridge, a summit that I first activated with Glenn, VK3YY, back in July 2012.

It was a last minute idea with little preparation. Enough time to check the contents of the backpack and post an alert on sotawatch. 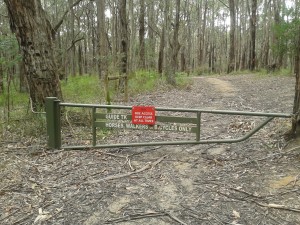 Dingo Ridge is the second closest listed summit to home so getting there didn’t take long. I decided to take a different route to the top this time approaching along Guide Track from the north west. This proved to be a lot more challenging than I recall the approach along Luptons Track was with some quite steep sections along the way.
Parking the car at the corner of Guide Track and Camp Road, I set off just before midday. Guide Track runs parallel to a creek for a few hundred metres, past a small lake, and then starts heading up hill. My progress was slow as it has been a while since I have hiked and the first steep hill for the day is always a challenge.

I stopped a few times along the way to catch my breath and enjoy the view to the north arriving at the Guide Track/ Luptons Track junction at 12:40. My initial plan was to be on air around 0200 UTC, or 1 pm local time, but this seemed unlikely.
I reached the junction of Luptons Track and Dingo Ridge Track at 1:10 pm and was on air about 30 minutes later as I took some time to set the linked dipole antenna up, taking pictures and video for a later blog post.

The first contact for the day was on 40 metres with Peter, VK3PF. He offered to spot me on sotawatch and we arranged a sked on 12 metres for about 20 minutes time. Contacts on 40 metres came slowly with a new station every couple of minutes. A contrast to some earlier activations where a pile up occurs as soon as you call. 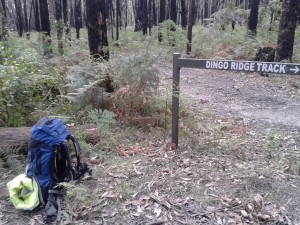 It was a pleasant change allowing for discussion with some people whom I had not previously worked. Of course there was also the regulars. After working the available stations on 40 metres, the last being Bernard, VK2IB, who was on summit  VK3/VE-093, I headed off to 12 metres looking to boost my 12 metre challenge score. Only Tony, VK3CAT, made it in the log despite my persistent calling. Moving to 20 metres revealed the same result with only Tony being worked. 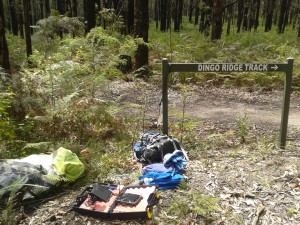 Returning to 40 metres exactly 60 minutes after I had left brought another seven contacts including Ed, VK2JI, a regular contributor to the Australian SOTA Yahoo group.

During the day a number of horse riders came past curious as to what I was doing. The last one came by at 3:30 pm just as I was heading off. The trip down was a little quicker as I had fewer stops and I arrived back at the car at 4:30 pm.
For the afternoon’s effort I had logged 23 QSOs, including one summit to summit QSO, and scored one activator point.