After driving down on Sunday 8 December 2013 from my overnight activation at Mt Tamboritha to Licola I decided I had enough time to head over and activate SOTA summits Mt Selma VK3/VT-013 and Mt Useful VK3/VT-016.

I arrived at Mt Selma just after 9 am and, working to a tight schedule, planned to be on air for only 15  minutes. After getting the antenna in a dead tree I sat and started calling. I soon stod up as the summit is crawling with ants. I have never seen so many ants in one place. Even standing and walking around they were climbing up my shoes and legs. Very annoying! 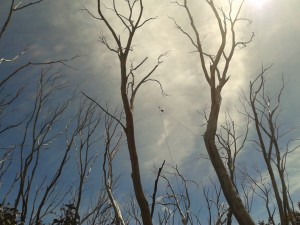 Antenna in the trees

After calling for five or six minutes, and posting a spot on Sotawatch, I had no response. This was most unusual as normally on 40 metres once the spot hits the web a small pile up will commence.  Peter VK3YE eventually answered my call. His comment was something like “I had trouble tuning you in until I realised you were on Upper Sideband.” At some point I had changed from lower to upper sideband which explained why I had no response to my earlier calls. Changing to LSB saw the usual chaser crowd and I worked 20 stations in 14 minutes.

Leaving Mt Silma I headed Mt Useful but I had run out of time for an activation and drove past the access track leaving it for another time.