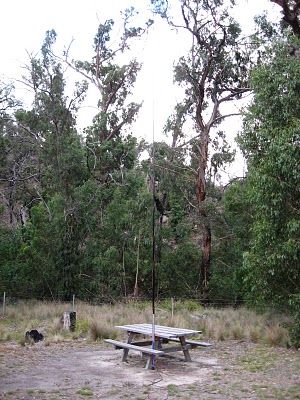 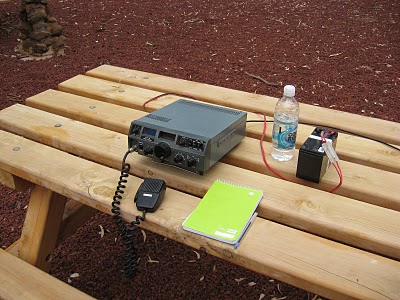 The first park I worked from on Friday night was the Great Otway National Park. I dropped two of my children off at a nearby camp and then had a look at a couple of spots that overlook Bass Strait. The wind was quite strong by the coast so I head inland a little to the Moggs Creek Picnic Ground. I set up my 20/40 m ground plane and started calling CQ. It wasn’t long before David, VK5HOL, answered my call. My new preferred antenna was working well. I chatted with David for a little while and then packed the antenna away and moved on. My next destination was the Brisbane Ranges National Park.

I arrived at the Brisbane Ranges park a little before 8 pm and again got my quarter wave assembled quickly, this time supported by a wooden picnic table. After just a couple of calls Dennis, VK5LDM, answered and reported I was a good solid signal into Adelaide. I worked Dennis for a while and then called CQ again. This time I was answered by Dom, VK2YDD/M, who was mobile near Goulburn in NSW. It was great to work from my portable station to a mobile station.

After QSB and local noise for Dom brought the QSO to an end I packed up and headed for home.

I thought about heading down to Wilson’s Promontory on Saturday to take a short hike and activate that National Park but the weather was not looking too good so I put that trip off for a while.

Keen to get at least one more National Park for the weekend, after dinner I headed to the nearest National Park to home. Churchill National Park is a small but hilly park in the south east suburbs. I had previously looked at the car park of this park but decided it was too close to the high voltage power transmission lines that cut a path through the middle. I had found a small gate on the northern edge of the park and, looking at Google Maps it seemed a fairly easy walk from the gate to the top of a hill away from the power lines. How wrong I was. I had not looked at the contours of the walk and soon after leaving the car found the track was quite steep. I had the FT-7, a 7Ah battery and the squid pole antenna in a pack on my back so the hill climb was more difficult than I had expected.

The track rises up about 90 m in a distance of about 600m. Very steep indeed. Once near the top I set the antenna and called CQ. It was well after 8 pm and the sun was almost down so I knew it would be tough to get a QSO. Perhaps I should have started earlier?

I was 3 minutes from my self imposed cut off time when Gary, VK3ZGC, answered my call. Although he was only 4 km away it was still great to hear a response.

Sunday saw me out early and heading for the Organ Pipes National Park. The vehicle gate on this park is closed until 8:30 am and I arrived at 7:45 am. I again packed my gear into the back pack and headed off. This walk was much easier than last night as the path is relatively flat.

Using my trapped 1/4 wave ground plane I heard the tail end of Gerry, VK2APG’s call of CQ. I answered him and we chatted for a while. Gerry reminded me that we had worked before back in 2006.

After Gerry I gave a few calls and John, VK3LKJ/7 returned. John is traveling around Tasmania and was a great signal from his mobile setup with a 7ft whip. After a bit of conversation I learned that John comes from the next town up the road from me. It really is a small small world.

So after the weekend I have four new parks in the log and four more green markers on the map.

I also have a new favorite antenna. The trapped 40/20 m ground plane has proved its worth in speed and ease of set up and pack up and it works quite well too.