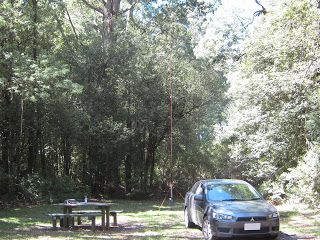 Today I got a chance to head east and down to activate the Tarra-Bulga National Park for the Keith Roget Memorial National Parks Award.

As usual I set up my trapped 20/40m ground plane and my FT-7 on a picnic table. I had been calling CQ for just a couple of minutes when VK5IS answered my call. Ian and I chatted for a while and I found out the Ian also uses a squid pole when working portable.

After chatting with Ian I decided to also put up my trapped dipole with 40 and 20m fitted so I could compare the ground plane to the dipole.

Talking to a couple of VK7 hams on 40m I found about 4 or 5 S point increase when using the dipole but when I worked Tony, VK3VTH/M the ground plane worked better, by about 3 S points at my end.

Later in the day I worked into Sydney on 20m and again I was able to compare the dipole and ground plane. This time there was a 3 S point increase on the ground plane compared to the dipole.

From all of this I conclude that sometimes one works better than the other, and other times it is the other way around.

Given the shear convenience of the squid pole ground plane I think I will stick with it for now.

I have updated my map to show the latest park I have worked from.