As I mentioned in update # 33 I have moved my BITX20 Version 3 into a new box but had some strange results.

The first issue was the huff ‘n’ puff display showed the offset count of 9.9972 MHz rather than somewhere in the 20m band. It also appeared the huff ‘n’ puff circuit would not stabilise the receiver. I found that I had swapped the VFO sense and VCO control cables when I had connected them to the BITX20 exciter board.

The other problem I had was that when I pressed PTT I got a constant 4 Watts output, with no modulation from the microphone.

I borrowed a CRO and traced through the circuit from the microphone amplifier along to the far side of the crystal filter. What I found was signals from each amplifier stage. I disconnected the input into each amplifier but I still got an output.

Then I checked the power supply rails and I found that the +RX supply was on for both RX and TX. This caused 3 separate amplifier blocks (Q1 & Q13, Q2 & Q12, Q3/3A and Q11) to be powered in both TX and RX and each of them was oscillating when PTT was pressed.

Normally this would also result in audio feedback between the microphone and the speaker but not in my case as I have the speaker disconnected by a relay when PTT is pressed. 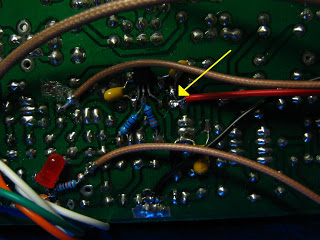 I found the cause of this on the under side of the board where I had connected a red wire to power the huff ‘n’ puff circuit. By mistake I had connected the wire to the +RX supply and, at the same time, bridged from the main supply to +RX with a small piece of solder.

Once I moved the huff ‘n’ puff supply wire to the main supply rail and removed the solder bridge my BITX20 started working again.

I will need to re-align the oscillators to allow for the new enclosure but at least I have found the major problem.