I had planned to work the 160m section of the VK/trans Tasman contest from the rebuilt VK3SCG JOTA station at Gilwell Park Scout Camp using the new 160m dipole but works on the tower have not progressed at the speed I had first hoped.

The idea with VK3SCG is to build a station that will be desired by more than just scouts. A station that other clubs and amateurs will want to use to either chase DX or work contests from. The site is also planned to accommodate the radio needs of major events that are held at the camp from time to time.

To achieve this the builders are trying to make the station as flexible as possible. The new tower will have separate antennas for 6m, 2m omni, horizontal and vertical yagis, 70cm omni and vertical yagi, 160m, 80m and 40m Inverted Vee, 20/15/10m yagi as well as VHF and UHF commercial band antennas. Add to this some local WiFi and a GPS receive antenna and you have a fairly useful antenna set up. 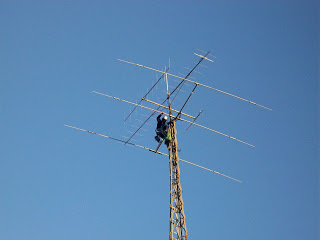 The tower is 30 metres tall and a further 1.7 metres has been added with twin rotators so the HF yagi and the VHF/UHF yagis can be rotated independent of each other.

A rope halyard is provided at 22m above ground for antenna experimentation.

So far the tower works have taken two full weekends and I reckon a further two weekends are needed to finish it off.

It’s been good fun setting the tower up and hopefully it will be just as much fun working DX from it.

This entry was posted in Amateur Radio, JOTA, SRESU. Bookmark the permalink.