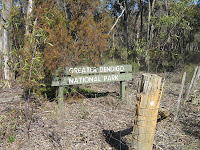 August was a busy month for me with my Keith Roget Memorial National Parks Award chasing. I had work in Mildura for a few days in the middle of the month and I was able to activate four parks during the trip up and back.

The first park to be activated on the Monday was the Greater Bendigo National Park. I had worked Johnno VK3FMPB from this park before but this was my first activation.

I found a quiet spot beside a dam near the town of Sedgwick  Here I put up my squid pole, secured to the car towbar, and ran out my switched inverted vee antenna. I made five QSOs on 40 m and one QSO on 20 m. A good start to the trip.

After two days working in Mildura I headed south and stopped in at the Hattah-Kulkyne National Park. Here I had no success for the first hour of calling and then discovered I had a break in my coax cable at the antenna. I found that if I screwed the cable tightly into the connector it would work. I was then able to make two contacts on 80 m and one contact on 40 m into South Florida before heading off to the Murray-Sunset National Park. 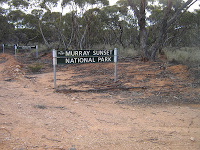 At the Murray-Sunset National Park light rain was falling but I was able to set up and work four QSOs on 80 m and four QSOs on 40 metres before packing up and heading to Ouyen for the evening.

On Thursday morning I took a small detour on the way home and headed over to the Wyperfield National Park. I found an easy access point on the eastern edge of the park near Yarto.

Although I was near some 220 kV overhead transmission lines I had no trouble making contacts on 20 m, 40 m and 80 m including Tony VK3VTH who was setting up his portable station on King Island ahead of the Lighthouse weekend.

After the contacts at Wyperfield National Park I head home, happy that I had added four parks to my total.

Ten days later, whilst on two weeks holidays from work, my wife and I headed east to spend two nights at the Orbost Motel. This provided a good base to work the five nearby National Parks. First was the Errinundra National Park which we traveled to on Sunday afternoon. Setting up at Postmans Track, about 2 km north of Goongerah on the Bonang Hwy I worked six stations, on 15, 20 and 40 metres finishing just before dusk. 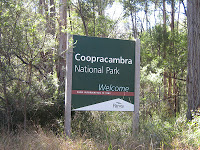 On Monday morning we headed east along the Princes Highway, turned left at Cann River and found Beehive Falls Track, in the Coopracambra National Park, about 29 km along the Monaro Highway. Here I made six QSO on 40 and 20 metres.

Leaving the Coopracambra National Park we headed back to Cann River for lunch. After lunch we went a bit further east on the Princes Highway to the Alfred National Park. We turned right at West Wingan Rd, which is the western edge of the park, and found a place to set up in the south west corner at the junction of Soda Creek Track and West Wingan Road.

From  this tight location I made contact with five stations using 40 and 20 metres.

Heading further south along West Wingan Road we found the Croajinolong National Park and set up near Mueller Link Track. This was the most productive session with nine QSOs added to the log including QSOs into Navada and Edmonton in Canada on 40 metres. 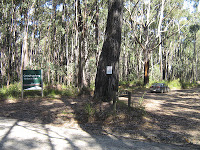 I was also getting regular contacts now with a keen KRMNPA chaser in VK4.

From Mueller Link Track we headed back to Cann River, turned left onto the Princes Highway and stopped briefly at the Lind National Park. Here I made only three QSOs using the FT817 running QRP.

We returned to Orbost in time for dinner at the Orbost Club.

On Wednesday, following some advice from Peter VK3PF, we headed toward Buchan to access the south western corner of the Snowy River National Park. There are two routes from Orbost to Buchan, one direct and one via Nowa Nowa. The direct route has about 30 km of winding roads as it follows the Snowy River up the valley while the Nowa Nowa route is longer, but has far less curves. We chose to go via Nowa Nowa and about one hour later we found the One Tree Hill Lookout about 8 km south of Buchan.

From the lookout I made four QSOs on 40 metres and two QSOs on 20 metres including the Ipswitch and District Radio Club commemorative station VI4WIP50.

I have now activated 40 of the 45 Victorian National Parks and have worked other stations in the remaining five parks. This qualifies me for an upgrade on my Keith Roget Memorial National Parks Award and makes me the first to work to or from all 45 parks. My next challenge is to activate the five remaining parks meaning I would have worked from every National Park in the state.

I have updated my Google map showing my progress.