There is an old saying that you can’t teach an old dog new tricks. Well I’m here to tell you that’s true.

Early last month I decided to write a logging app for my Android tablet to use when portable. Of course I knew nothing about Android operating systems so I went to Google and found that many apps are written in Java. I soon downloaded and installed some software on my PC and I wrote my first Java app. Hello World was easy. I just took the sample code and changed a couple of things and I was away.
Then I tried doing more and quickly found myself out of my depth. The more I try tried the less progress I made. I started reading the Beginning Programming with Java for Dummies to but that didn’t quite stick. I got more and more frustrated the more I tried.

There had to be an easier way. 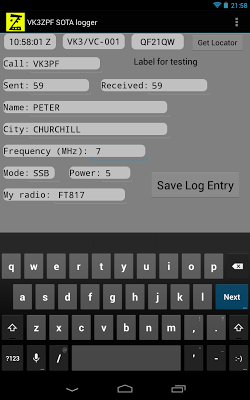 Then one night I typed android basic program into Google and stumbled across B4A in the sponsored ad at the top of the search results. Clicking through I found just what I was looking for. BASIC for Android.

You see, I’ve been writing BASIC program since the Tandy TRS-80 was the latest thing going around and I was at secondary school in short pants.

Within a couple of hours I was well advanced on my app. A day later I had handed over some of my hard earned for the full version and I was away.

The result, still in beta testing, is shown here. It captures all the usual info, uses the GPS to record the Maidenhead locator and outputs CSV file for SOTA activations and ADIF format for uploading to my logging program.

This Sunday I am taking it out on its first activation to Riddell Ridge to give it a real test.

Hopefully it works as intended.

This entry was posted in Android, SOTA, VK port-a-log. Bookmark the permalink.