Monday was a public holiday and I needed to pick my son and his fiancee up from camp north of Yea so I looked at what SOTA summits were nearby and could be done in time. I considered Andrew Hill, VK3/VN-020, and Mt Hickey, VK3/VN-015, however these both looked like taking too long for access up and down. 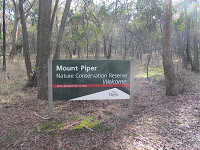 Instead I chose an early ascent of Mt Piper, VK3/VN-028, located just before Broadford. Although Broadford is not really on the way to Yea the Hume Freeway does help make up time on the journey.
The Mt Piper car park was easy to find at the end of a thin reservation off Jeffreys Lane. The access road is a little rough with some ruts along the way. No problem for my RAV4.

Leaving the car park at about 8:00 am it took me 20 minutes to walk up the zig zag track to the top where I found a trig point ideal for the squid pole to be attached. Unfortunately I had decided to not bring the squid pole opting instead to throw a rope in a tree. The trees up on Mt Piper are not very tall so the apex of the linked dipole, set as an inverted vee, was only four metres above the rock.
First up I tried 12 metres but after calling for 15 minutes I had nothing. Calling on 20 metres had the same result. The weather on top of the hill was cold. About 2 or 3 degrees Celsius I’d guess, and I had left my gloves at home. 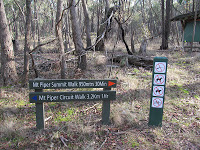 Moving to 40 metres just before 9:00 am brought a steady flow of contacts with 33 QSOs in the log by the UTC change including summit to summit contacts with Wayne, VK3WAM, at VK3/VS-014 and Rik, VK3KAN, at VK3/VE-001. Signals on 40 metres were weak to start with and improved as the morning progressed.

Among the pre UTC contacts was one with Andrew, VK2UH, who kindly informed me I had been giving out the wrong SOTA summit reference. I had taken the reference from a draft updated list of summits that was not 100% correct.

After the UTC change I worked a further 17 stations including Wayne and Rik for two more summit to summit contacts. In among all the contacts were two 12 metre QSOs with Bernard, VK3AMB, who has recently achieved the Shack Sloth status by accumulating 1000 chaser points.

I arrived at the camp right on time for the pick up.