As I have done for the past few SOTA activations I looked at alerts on sotawatch.org and emails to the VK SOTA yahoo group for upcoming activations of summits I have not been to. After successful activations at Talbot Peak with Glenn and Mt Ritchie with Allen I found Marshall was heading to Mt Torbreck, VK3/VN-001 on Sunday.
After catching Marshall on air on Saturday and a couple of confirmation emails the plan was set.
I left home just before 6:00 am and, after a short stop at Healesville, and a careful drive over the Black Spur, I heard Marshall call me on 2 metres to check my progress. I was about ten minutes behind him, meeting up with him at the intersection of Goulburn Valley Highway and Snobs Creek Road.

From here we traveled about 14 km south on Snobs Creek Rd before turning left in to Conn Gap Rd. About 1 km along Conn Gap Rd is a steep track to the left, closed during winter, that leads to the Barnewall Plains camp site. There is plenty of room to park here. As the road was closed we loaded up our gear and headed off on foot. The walk to the camp site is easy going along a good 4WD track rising about 160 vertical metres. We arrived at the camp site just before 9:00 am. The walking track to the summit is marked with small reflective triangles on trees and, although steep in some sections is not a difficult climb up. The track rises from 1160 m to 1500 m ASL over a distance of 2 km. We arrived at the summit just before 10:00 am, agreeing with the signage that it’s a 1 hour journey up.
The weather at the summit was absolutely fantastic for this time of the year. It may have been about 3 degrees but there was no wind and the sun was shining brightly. Marshall set his vertical antenna on the rock cairn while I set up my squid pole and linked inverted vee about 10 metres away. Marshall worked the usual crowd on 40 metres, including summit to summit QSOs with Andrew VK1NAM, Allen VK3HRA and Brian VK3MCD which he called me over to work.

I self spotted on 12 metres and worked four stations over 10 minutes. Moving down to 20 metres I added 5 QSOs to the log including a summit to summit contract with Peter, VK3PF, who was doing a joint activation with Allen, VK3HRA, at Talbot Peak, where the weather was not so kind.
With the great weather we had on the hill there was no hurry to get down. We packed up and headed down just after midday stopping briefly to build a sad looking snowman with what little snow we could find.
We looked around for about 10 minutes at the camp site before walking back to the cars. After chatting a bit we were on the way home by 2:00 pm.

I arrived home just after 6:00 pm after deviating along the way for afternoon tea with my mum.

P.S Marshall’s has placed a blog post and more photos are here. 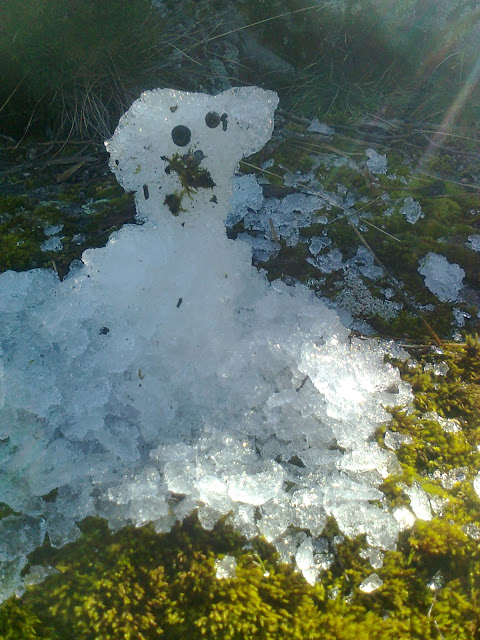