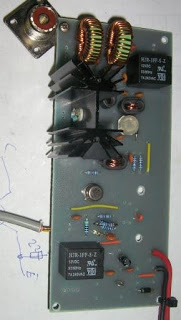 It has been well over a month since I have worked on my BITX20. I had been waiting for Leonard, KC0WOX, to complete his assembly manual for the BITX Version 3 linear amplifier before I assembled mine.

Yesterday and today I followed Leonard’s guide and started placing the parts and testing each section as I went along. I had no problems with the driver section but didn’t have enough ceramic capacitors to complete the final amplifier and filter section. It seems that Sunil’s list of parts doesn’t allow for the ceramic capacitors in the amplifier. Once I have it all working I will review the parts used and let Sunil know if there is parts missing.

A trip to DSE saw my buy enough capacitors to finish off the amplifier. They didn’t have the correct values so I had to parallel smaller values to get what I needed.

Leonard suggest wining the transformers and inductors on ferrite core formers rather than the binocular formers supplied. Since I didn’t have any core formers available I used the supplied ones.

After placing all the parts I tried setting the bias for the IRF510. I couldn’t get a reading on my Fluke digital multimeter regardless of the pot’s setting. Leonard tells me I should get 40-50 mA. I bit of investigations shows the fuse for the 300 mA range inside my DMM is blown. I don’t remember doing it but these things happen.

I managed to set the bias current for about 45 mA and then hooked the amplifier up to my DDS oscillator and a 10 W power meter.

I increased the output of the oscillator to max and the total current of the amplifier increased to about 300 mA but the power meter didn’t move.

This may be because the oscillator doesn’t have enough output to drive the amplifier, or it could be the power is being lost in either the transformers in and out of the IRF510 or in the output filter.

I need to either build a Sharpie RF probe or borrow a CRO so I can measure the actual RF voltage in the circuit.