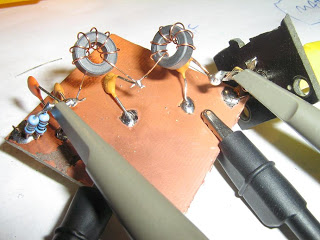 After not getting a measurable output from the final amplifier I borrowed a CRO to help work out what was going on.

I quick check showed that I was getting about 35V p-p out of the IRF510 with about 800 mV p-p input but nearly zero out of the output filter.

This showed that there was a problem in the filter and I suspected it was the inductors I had used. I had purchased some 47 uH inductors, designed for DC power supply use, and used them in the filter.  Of course I didn’t need 47 uH of inductance, I need 0.47 uH or something near that. I don’t have an inductance meter so winding inductors has always been a lot of trial and error.

I duplicated the output filter onto a small off cut of PCB and tried a few alternative inductors.

I found the inductors pictured above worked well, with the pass band starting to roll off about 16 MHz.

I’ll published the winding details later once I get everything worked out.

I added these new inductors to the final amp and now I was getting 1.2 Watts output at 14 MHz with 800 mV p-p input from my DDS oscillator.

I moved the frequency around a bit and found I get 3 Watts output at about 10.4 MHz so I still need to work a little more on the transformers to peak them.

But at least I now have a measurable output.

At one stage I got in excess of 10 Watts out. I don’t know how much excatly as my meter was on the 10 Watt range and it went full scale. I suspect the amplifer was taking off and self oscillating. The 2 Amp inline fuse didn’t blow but I turned the power off and it behaved OK after that.