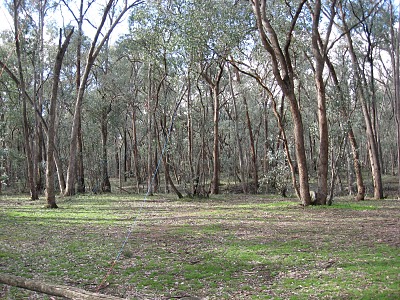 It has been a while since I have blogged about the Keith Roget Memorial National Parks Award but I have been working away slowly at activating 15 National Parks.

Back in late February I activated the Heathcote – Graytown National Park while on my way to the Hoadley Hide site visit. I drove up to the top of a hill and used my 20/40m squid pole antenna lashed to a tree stump.

In April I was down on the Mornington Peninsula and worked Dan, VK4MAX who was mobile in Queensland. On this occasion I hung my 20/40m squid pole antenna from a tree, instead of using the pole. It still worked the same and QSOs came easily.

Yesterday my work had me heading to North East Victoria so I packed the radio in and, after work, headed up to the Chiltern – Mt Pilot National Park. The antenna this time was the 20m droopy ground plane strung from a tree. After a few calls I got an answer from Dan, VK4MAX/5. The name and call sign sounded familiar but it wasn’t until I got home and checked the log that I realised that it was the same Dan that I had worked from the Mornington Peninsula National Park.

Now I have just one more park to go to qualify for the award. I’m tossing up between Point Nepean and Wilson’s Promontory for a special effort, or I can wait until the end of July when I am heading to the Grampians anyway.