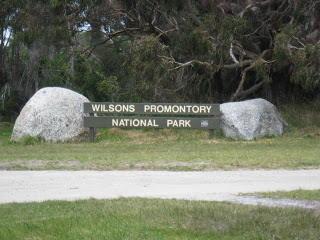 Two separate Keith Roget Memorial National Park Award activations happened yesterday and there is one more today. These activations were pre-announced on the krmnpa Yahoo list.

Because these activations were announced on the krmnpa Yahoo list there were award chasers waiting to make QSOs with myself and Tony. Tony and I even made a park to park QSO during the day.

At Wilsons Promontory I set up in the Five Mile Rd car park using my trapped 20/40m ground plane. I had initial hoped to use the Telegraph Saddle car park, which is the highest point in the park that can be driven to, but Parks Victoria close the road to the car park during busy periods as it is quite small. As an alternative they run a shuttle bus up and down the road to take people there and back. While it would have been a worthwhile experience to pack the gear into a back pack and ride the bus, I didn’t have enough time available to do such.

Later in the week Wal, VK3WZ and Lachlan, VK3LWZ, are planning to activate the Brisbane Ranges National Park and the Organ Pipes National Park. Details of these activations will be posted on the krmnpa Yahoo list.