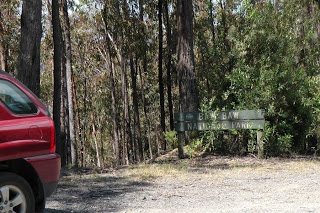 Today I had some time free to head to a park and I was tossing up between Baw Baw and The Lakes. Baw Baw won by about 30 minutes of travel time. I will get to The Lakes another time.

Tony, VK3VTH, had worked from the Mt Erica car park earlier in the week and mentioned that it was busy and stuck right hard against Mt Erica, so the outlook was restricted. Given that I was driving a fair way to get there and I had only an hour or two available I wanted to be sure I made the best use of my time. I had a look at the Visitor Guide for the park and looked at Google Earth for a suitable non-public car park. I thought I had found such a place on Thompson Valley Rd.

However once I was in the park I couldn’t find a suitable place and drove all the way to the dam wall looking. On the way back I saw a road off to the left, with a Baw Baw National Park sign on the edge of the road. The intersection was big enough to safely park and the trees overhead were tall enough to throw a string over and hang an antenna from. So I rigged my 20/40m ground plane from a tree branch and started calling CQ, firstly on 40m and then on 20m.

I got no response after 20 minutes of calling so I went looking on 20m and found a QSO just finishing up. I called and spoke with Dave, ZL2OK, who was a good workable signal. After that I put out a call on 40m and worked Jeff, VK2XD, from Wagga. A final tune around 20m found Winston, VK7WH, testing his new Hex beam in the back paddock. A short QSO with Winston and I had three QSOs in the log book for the hour’s working.

A word of caution to those heading to the Baw Baw National Park. Be sure to take a copy of the Visitor Guide with you so you are sure you are within the park. There are many areas that are not in the park, as shown on the map, but it all looks the same on the ground. Of course I know I was in the park as one line of my antenna was tied to the park sign 🙂