Posted on September 28, 2011 by Peter Fraser
In the last couple of months I have increased my PSK31 activity, mostly in the afternoons between 0600Z and 1000Z. When I get home from work really early I’ve even been starting around 0400Z. What I have seen is a lot of stations from Europe and surrounds. Many stations from European Russia, Ukraine and a few from Switzerland and The Netherlands. All QSO have been good, most are simple exchanges of RSQ, name and location. Then a cheery 73 and on to the next QSO.
What has surprised me is that DX stations seek VK stations. I had previously held a belief that VK was not a sought after prefix and that everybody everywhere would have already worked VK and would be looking for more exotic locations. 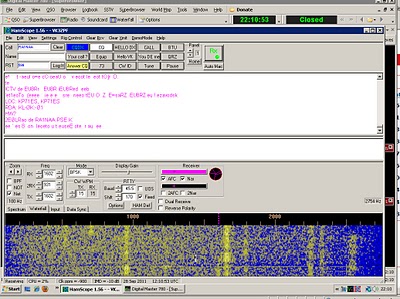 A few times recently I have been ‘spotted’ on DX Summit and immediately a PSK31 dog pile results. I can tell you it is nice to feel wanted but it does make operations more of a challenge. A simple CQ call results in much waterfall activity, where you know stations are calling but they are not being resolved. Eventually one station will be stronger than the others, or will transmit slightly longer and a callsign will be revealed.

Another product of being ‘spotted’ is some operators, who may or may not be able to see I am in a QSO, will call and call and call, often wiping out the DX station I am working. I consider this to be rude behaviour. If you call once and don’t get a response I think it is good manners to wait and see if the stations you want acknowledges your call or calls CQ again. If they don’t call CQ again then move on and work somebody else, or wait until the do. As a rule I work rude stations last.

Incidentally I’ve taken to running two PSK programs now. I use Hamscope as my primary tool for receiving and transmitting and keep DM780, part of the HRD suite, in Super Browser mode running in the background. Where I have trouble resolving a callsign on Hamscope I can look at DM780 for a second opinion. DM780 also helps when looking for stations calling CQ as the Super Browser displays many signals at the same time allowing me to then move Hamscope to the station of interest.

With so much DX activity I have almost run out of QSL cards. I have placed a second order with  Gennady UX5UO and I should have more cards soon. This will probably mean a delay of a couple of weeks in me getting my cards to the QSL bureau but I’m sure there are enough other delays in the bureau system that no one will be too bothered.

With the good DX conditions I have also looked around on SSB every now and then and worked some good contacts there as well but the urban noise at home still makes this an uphill battle.

This entry was posted in Amateur Radio, PSK31. Bookmark the permalink.