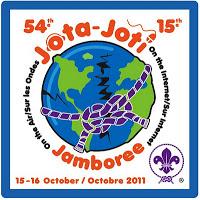 This year I again took some Venturers to the Harkaway Scout Camp, just north of Berwick for a ‘bludge camp’. The idea of a bludge camp is that very little is planned and the Venturers are left to do what ever they want, within reason.

I set up a dual band vertical, 2m & 70cm, in a tree to access the ScoutNET repeater network. The ScoutNET is four 70cm repeaters interconnected to allow connections between various scout camps and halls. During the weekend I worked JOTA stations at Gilwell Park, Tyne St Scout Hall and Mafeking Rover Park via ScoutNET.

I also strung my multi-band HF antenna covering 80, 40 and 20m in the trees at about 8 m above the ground. On HF we worked stations in VK3, VK4, VK6, New Zealand and Germany. We used SSB, PSK and SSTV. 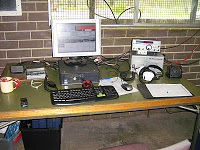 I had a problem with RF interference to and from the USB keyboard we were using so PSK and SSTV were limited to predefined macros.

We got 16 QSO in the log and those Venturers who were interested got to have a talk on the radio.

A good fun weekend for all.

This entry was posted in JOTA, PSK31, SSTV. Bookmark the permalink.