Last weekend was the first “National Parks Activation Weekend” where amateurs in Victoria were encouraged to go out into the state’s National Parks and make contacts from those parks. These contacts were then eligible to be used toward the ARV Centenary Award and the Keith Roget Memorial National Parks Award.

Tony, VK3VTH, tells me that at least 18 National Parks were activated during the period. I worked some stations on Friday and Saturday from home, including VK100ARV from the Brisbane Ranges National Park.

For my part I went to Churchill National Park on Saturday afternoon to try out a modification I had made to my 20/80 switched Inverted Vee antenna. It was a simple mod where I had cut the wires and added a 40m band section to it. At the same time I also included RCA plugs and sockets as a means of connecting and disconnecting the wires for the different bands. 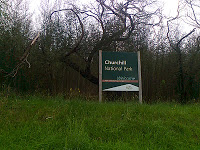 At Churchill National Park I was unable to test the antenna as an Inverted Vee as I forgot to take a piece of coax long enough to reach the centre of the antenna when it is up on the squid pole. So, rather than not activate the park, I configured the antenna as a 40m inverted L with the feed being only 2 metres from the radio, attached with two short patch cables joined together. The SWR was good in this arrangement and I made 12 QSO in just over an hour. 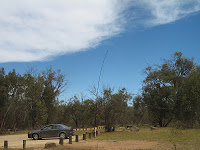 On Sunday I had to travel to Wodonga for work so I stopped by the Warby – Ovens National Park and set the modified antenna up properly on the 10m squid pole. The SWR on 20m and 40m was OK (<2:1) but it was too high on 80m so I had to add some extra length before working that band.

At the Warby – Ovens National Park I  made four 20m QSO, 22 x 40m QSO and two 80m QSO using the switched Inverted Vee antenna. Changing bands was as easy as lowering the squid pole, plugging or unplugging the right RCA plugs, and pushing the pole back up. 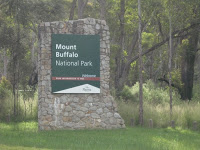 Although no longer part of the activation weekend, after work on Monday I headed off to the Mount Buffalo National Park where I again used the switched Inverted Vee antenna. The drive to Mount Buffalo National Park takes about an hour from Wodonga and passes through some lovely rural farming area that was once full of farms growing tobacco. Nowadays it seems the old tobacco farms have made way for grape growing. I passed a few vineyards on the trip out, arriving at the start of the park just after 6 pm. From here I was able to make 16 QSO in about an hour before driving back to Wodonga.

On Tuesday after work I headed out to the Burrowa – Pine Mountain National Park, about 120 km East of Wodonga. This drive was a bit more up and down than the previous night. I made 18 QSO from Burrowa – Pine Mountain, again using the switched Inverted Vee. I would have loved to had stayed on air longer at these two parks but I wanted to be out of the parks before dark and back in Wodonga before 10pm so I could get a good night’s sleep before work.

So at the end of all this I had added 74 QSO to my log, activated 4 National Parks, worked into four other National Parks and tried out a new antenna design.

I have updated my KRMNPA map here.