Four Parks and a SOTA summit in one weekend

Posted on June 19, 2012 by Peter Fraser
The weekend started well with my son driving most of the way to Warrnambool. From Warrnambool I drove straight toward the first night’s camp at Coboboonee National Park.

The roads within National Parks are rarely bitumen and vary between rough four wheel drive tracks, gravel roads and well maintained dirt roads. Nearly all the roads during this trip were the later category. 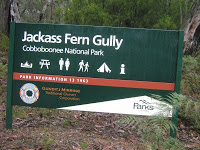 Arriving just after dark at the first night’s camp I found that Parks Victoria had closed the camp. I checked the Park Notes and headed further in to the park to the second camp site.

I was the only one at the Jackass Camp Ground for the Friday evening and I set up the antenna and got on air right on time. After making five contacts I left the radio and set up my tent and cooked up some food from a can and had dinner. Another couple of QSOs and it was time for bed. 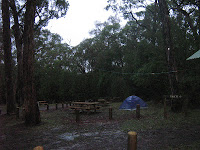 Rain had been forecast for the weekend and around 4 am it started. The rain would continue on and off for the remainder of the trip. I got back on air around 7 am and tried for some 20 m contacts. I was successful and had a good chat with John, ZL2JBR. I made one more QSO on 40 and 80 metres and then packed up my wet tent and antenna and headed off to the Lower Glenelg National Park.

Coboboonee and Lower Glenelg share a border with signs telling visitors when they leave one park and arrive in the next. 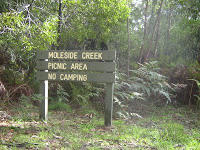 I continued past the border heading for a feature known as ‘The Inkpot’. The Inkpot is a water filled hole that is very very dark in colour – hence the name. When I arrived at The Inkpot it was still raining and a quick look around showed that it was not an ideal place for setting up. I could get the car off the road but there was not enough clear area to set the antenna easily. It could be done but given the wet weather I figured going a little further to the next picnic area may be better. This proved to be a good decision. 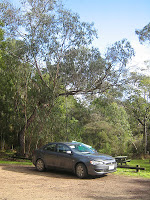 Running through the middle of the Lower Glenelg is a bitumen road linking Nelson and Winnap. Driving along this road was a pleasant change to the bush roads of earlier. The Moleside Picnic area was an ideal place to set up with a good sized clearing and a small car park. Again I was the only one there. I operated for 90 minutes and made 14 QSOs including contacts on 20 and 15 metres. I also secured SOTA contacts with Wayne, VK3WAM, on Mt Ritchie and Ron, VK3AFW, on Mt William.

From the Lower Glenelg I headed toward Mt Richmond National Park. The fuel gauge was showing that I needed fuel soon and I was thinking perhaps I should head to Portland to top up before Mt Richmond. However Mt Richmond was not that far away and taking a short cut beside the pine plantation help cut 20 km off the trip. 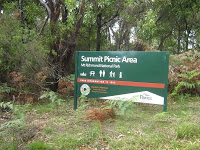 At Mt Richmond the choices for setup are quite limited. I settled for a small clearing on the side of the access road that was just big enough for one car. From here I ran the antenna into the bush on one side and cross the access road on the other. This was a bit of a risk as the wire would fall across the road whenever I changed band. This proved to be not a problem as there was only one other visitor during the time I was there. Whilst here I made 14 QSOs including four contacts into Europe on 20 metres. The propagation to Europe was very good and I would have liked to have worked some more but I needed to move on.

Driving out of Mt Richmond the fuel warning in the car showed less than 50 km of fuel left in the tank. It’s about 30 km to Portland so I would be OK. I stopped at Portland and refueled then drove on to Mt Eccles National Park. 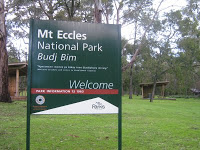 Again arriving in the rain and right on dusk I set the antenna and made it on air a little ahead of time. I worked a few stations then set my tent up. While setting the tent I was called by John, VK3ZX. I haven’t heard from John for a while and it was good to catch up. After setting the tent I worked some more stations, cooked dinner, worked a couple more and the went to bed.
In the morning I got on air about 6 am and called for 30 minutes on 20 metres but I couldn’t secure a contact as the band was dead. This was disappointing as I really wanted to get a 20 m contact from each park if I could. Still, I had made 12 QSOs from Mt Eccles.

The radio set up for all the National Parks was the FT757 and the ‘ZPF special’ pluggable inverted Vee on a 10 metre squid pole. The FT757 seemed to have an intermittent problem in the receiver where the back ground noise, and presumably any signals received, would decrease significantly for a few seconds and then return to normal.

Leaving Mt Eccles National Park I headed for the SOTA activation at Mt Napier, about 50 km away. This trip would normally take about 40 minutes but it took nearly an hour as I had to travel slower than normal to avoid hitting the many kangaroos that call this part of the country home.

I got to Mt Napier car park as the sun was just breaking through.There was light rain as I set off with my back pack, FT817, ‘ZPF special‘, squid pole, 8.4 Ah LiFePo4 battery, extension speaker, GPS, note pad, pen and two ratchet straps. I was nice and dry in windproof jacket and over pants. I had a broad brim hat for the lower sections to keep the rain off, gloves to keep my hands warm and a beanie for when I got to the top.

Part way up the track to the summit the rain stopped and was replaced by low cloud. Just near the top the trees thin out considerably and the wind picked up. I couldn’t keep my hat on so I swapped out for the beanie. Visibility was 25 – 50 metres and the wind was about 15 km/h. 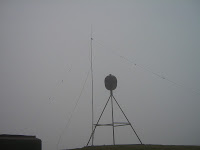 At the summit I set the squid pole up on a leg of the trig point and ran the antenna out down either side of the hill. One end was tied around a rock and the other end made it about 1.5 metres up spindly little tree. I set the antenna for 40 metres and assembled the radio behind the 1 m cube of concrete that is at the summit for some reason. This allowed me to get out of the wind and the cloud blowing past.

I called on 7.110 MHz for five minutes and got no response then went looking down the band – nothing heard. Heading back up the band I heard the tail end of VK3PF calling me. Number one QSO for the log. 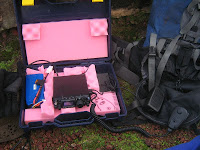 Fifteen minutes later I had the required four contacts. When I packed up at 9 am I had ten QSOs in the log and I was much practiced at writing while wearing gloves.

I took a few photos of the set up and headed back down.

From Mt Napier I headed back to Warrnambool, collected my son, and headed home.

A successful weekend away with four National Parks and one more SOTA activated. A total of 61 QSOs across 80, 40, 20 and 15 metres.

73
This entry was posted in KRMNPA, SOTA. Bookmark the permalink.