Last Saturday and Sunday were spent at VK3SCG, the Gilwell Park Scout Camp station. The main aim for the weekend was to get the two rotators at the top of the tower working. This required us to install a multi-core cable from the base to near the rotators where it then connects, via a protective box, to two leads, one to each rotator. There was a strong possibility of rain for the day, and it did.

After connecting up the rotator for the HF Yagi and swinging it through its full rotation, we found that the VHF/UHF array was also turning. This was a concern as they are on different rotators. We didn’t have a controller on-site for the VHF/UHF rotator on Saturday so we left that problem until Sunday. 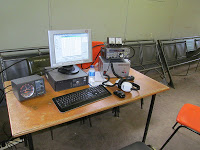 Saturday night I set up the FT7575GX and made good use of the HF Yagi. I worked the OCDX contest for two hours and made 76 QSOs on 15 metres. Most of these QSOs were with Japanese stations but there are stations from Finland and Russia also in the log.

Sunday morning saw me back on air working some more OCDX but the QSOs were much slower. I was pleased to work a station on Mariana Island as that is a new DXCC entity for me.

I finished up with 119 QSOs on 15 metres and one QSO on 40 metres. I’ve submitted an entry into the 15 metre low power single operator category with a claimed score of 19278. 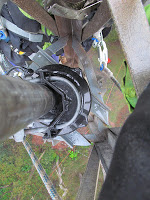 The VHF/UHF array problem was looked at and found to be that the rotator clamps on the pole had come loose. This was due to the misalignment of the rotator relative to the pole. The rotator appears about 15 mm off centre. I talked with Peter, VK3AJ, who mounted positioned the rotator when the tower was on the ground, and we came up with a few methods to correct this. When I showed Peter a photo of the problem, the solution seems as simple as elongating the mounting holes to allow the base to move to the centre. This will be tried when next we do work on the tower.

On the way up to Gilwell Park on Sunday Pete stopped by Jaycar and got two cable glands for the box and we fitted them as well.

Jamboree On The Air, JOTA, is happening over the weekend of 20 & 21 October and I’m looking forward to using the upgraded VK3SCG antenna system to make contacts with scouts around the world.

This entry was posted in Amateur Radio, JOTA. Bookmark the permalink.