Back in January I achieved the 500 point SOTA chaser award and was halfway to Shack Sloth status.
A SOTA chaser is station that makes contact with another station who is activating a SOTA summit. Sometimes I am an an activator, sometimes I’m a chaser. Sometimes I’m both.

On ANZAC Day I achieved the coveted 1000 point Shack Sloth award with a contact to Marshall VK3MRG who was set up at Mt Bride.

Shack Sloth is not really the case for me as just under half of my qualifying QSOs were from locations other than home, with 20℅ being made while I was on a SOTA summit too.

I am the third VK amateur to achieve this award behind Peter VK3PF and Glenn VK3YY. 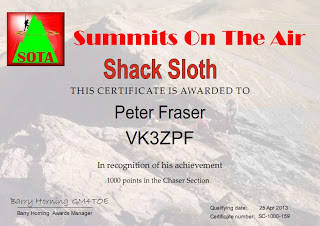 Of course such an award can not be earned without activators. Appearing often in my SOTA chaser log are the following stations;
VK3WAM 40 QSOs
VK3HRA 35 QSOs
VK3PF 31 QSOs
VK1NAM 28 QSOs
VK1RX 19 QSOs
VK3YY 15 QSOs
VK1DI 12 QSOs

There is a trophy available for the major SOTA awards and I’ll be ordering mine later this month.