I started pursuing the Keith Roget Memorial National Parks Award in December 2008 with an activation of the Alpine National Park. Over the next four years I would travel across Victoria and activate all 45 National Parks with the final park being the Barmah National Park during the 2012 KRMNPA weekend. This QSO was with Peter VK3PF who was portable in the Lind National Park. 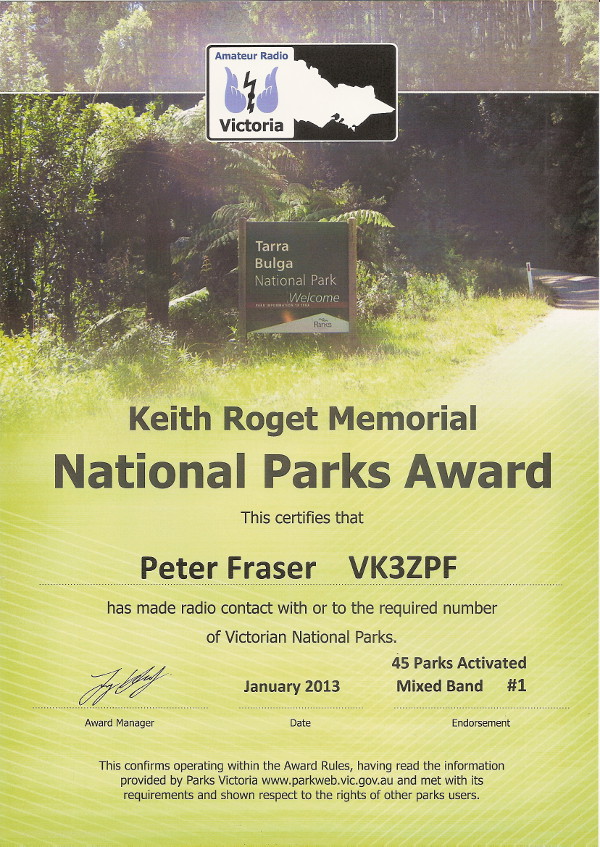 Having already activated all 45 Parks I was casually ‘chasing’ all 45 parks before the announcement of the plaques. Once announced I began focusing more on other activations and, at the start of April, needed only Croajingolong, The Lakes, Errinundra and Little Desert National Parks to complete the 45.

Tony VK3VTH activated Croajingolong National Park on 21 April while I was portable during the Easter break. Phil, VK3JNI, was sailing on the Lakes on 25 April and agreed to stop by The Lakes National Park on his way back to Paynesville and activate this National Park.

John, VK5BJE, was portable in the Errinundra National Park just after 3 pm local time and I worked him to make it 44 ‘chased’ National Parks. Peter, VK3PF, also worked John and claimed the first Merit Plaque for chasing 45 National Parks. Peter had early in the month achieved Mountain Goat status for achieving 1000 activation points from SOTA summits.

The next day Peter, VK3PF, made a quick visit to French Island National Park to also complete the Grand Slam. Congratulations Peter!

My new goals for National Parks is to make 44 QSOs from them to build my activation tally for the WWFF award and VKFF award.