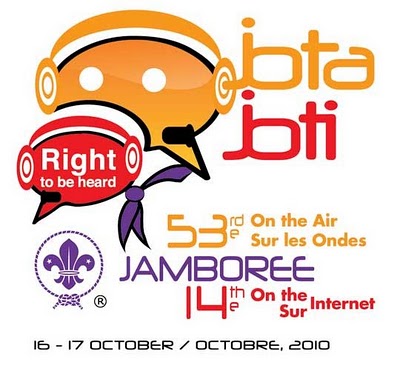 I have participated in more JOTA than I care to remember. I get a real kick out of helping young people enjoy radio. Who knows, maybe they will go on and get a licence and make a career out of radio, like me.

Last weekend was the 53rd annual JOTA and, for the first time, I set up a JOTA station and ran it under my own callsign. Most years I have been at stations with a VK3S** call sign such as VK3SBH or VK3SCG.

I had taken the Friday off work so I could get in early and set up before the kids arrived. The SRESU also had use of VK100WIA so I was keen to get that on air as well. The original plan was to be on air by about 10:00 am. 11:00 worst case.

Unfortunately that didn’t happen as I didn’t get the car packed until about 12 as there was much rain and many other things to do before going away.

Contacts with VK100WIA were slow to begin with and I seized the opportunity when the rain stopped to also put up my trapped 20, 40m ground plane. Rather than use the squid pole I threw a rope over a tress and hung the wire overhead. It was a good throw as I was able to get the radials about 3 m off the ground. The SWR on 20m was good but 40m was about 1.8:1. Not ideal but the vertical performed better than the dipole on 40m giving about 2 S point increase on receive.

During the JOTA weekend I made contact with stations in ZL, VK4 and VK3. The Venturers and Scouts that were at camp had a go and everything worked out well.