Last weekend was the annual international Jamboree On The Air, JOTA, a chance for scouts and guides to communicate with other scouts and guides around the world. I have participated in JOTA every year since I was 8 years of age. In fact JOTA was my first introduction to Amateur Radio when I visited the Box Hill TAFE college station and wondered at how radio worked. 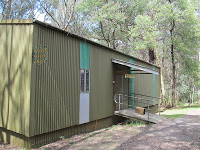 This year I helped out at the Gilwell Park JOTA Patrol Activity Camp where about 75 scouts and cub scouts camped for the weekend and participated in 14 different activities. These activities were set up as bases around the camp ground and included radio orienteering, fox hunting, metal detecting, antenna mast construction and, of course, amateur radio. The scouts moved around these activities in patrols of between three and seven and spent about 40 minutes at each base. 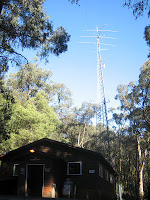 At the amateur radio base, which I was running, scouts learnt briefly about amateur radio including licence types, propagation, phonetics, activities, modes, activities and then got the chance to talk with other scouts using radio.

All the contacts during the rotations were with Australian stations in VK2, VK3, VK4, VK6 or VK7. Mostly this occurred on 40 metres with one on 20 metres and one QSO on two metres via VK3RSR. I even swapped SSTV pictures with one station.

During the QSOs scouts talked about pets, hobbies, badges and the like. The most common question asked was “Are you going to the Jamboree?” referring to the Queensland Jamboree AJ2013 happening in early 2013. 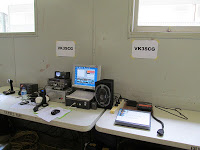 For the amateur radio base I was set up in Storm Hut and using the VK3SCG tower that I have blogged about before. My equipment included FT757, TM742, FT817 and a PC for SSTV and PSK. During previous JOTAs we have had trouble with antennas and getting QSOs from the old tower. One year we resorted to just talking to a leader in the car park on a 70 cm handheld. There were no such problems this year and contacts were available within a couple of minutes of calling.

Most of the scouts were happy to talk and three or four had recently passed their Foundation Licence assessment – but were still waiting for the badge.

On Saturday night the activity team and leaders run a fair where scouts can spend JOTA dollars, earned during the day, on fairy floss, bush donuts, throwing games and other things. 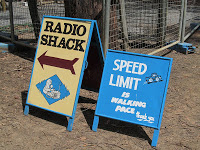 After the fair was the opportunity to again use the radio. Unfortunately I was only able to work one Canadian station, who was not participating in JOTA, while a scout was present. The scout got to speak briefly with the Canadian and that was a real thrill for him even if it wasn’t a scout station.

By the time the scouts went home on Sunday afternoon they had all had fun and it was smiles all-round. 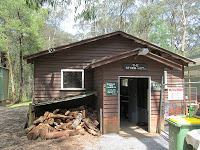 Next year, I’ll head back to the same camp to do it all again. I may make some improvements to my station to include headphones for the scout using the radio as the ambient noise inside Storm Hut did get a little high at times making hearing the other station difficult. I might also add a giant indicator to the transmitter to show modulation output so the kids can see when they talk quietly not much goes out. Perhaps a giant LED bar graph will do the trick. If I set a target for them to aim for then that should help get the signal out.