Within the SOTA rules is the opportunity to activate each SOTA summit once per calendar year. You can go more often if you like but activation points can only be gained once a year. Yesterday I revisited three summits that I had activated before. 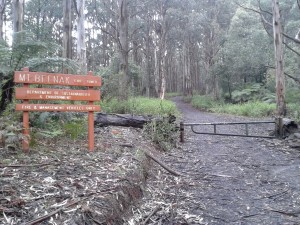 I first activated VK3/VC-016 Mt Beenak for the John Moyle Field Day contest in 2012. That activation was also the first use of my new FT817ND. Yesterday’s activation was in overcast conditions with misty rain falling occasionally and a temperature of 12 degrees. I have recently started carrying a small tarpaulin and it proved most useful, fitting well to the trig point. 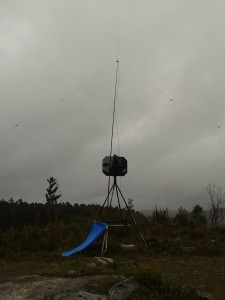 Finding the summit was easy enough and I followed my map from 2012 to confirm it was still correct. I arrived on the peak at 9:30 am and was on air 15 minutes later.  I set up my linked dipole, in the inverted-vee configuration, on a 9 metre squid pole strapped to the trig point.

There was a very strong station on 7.085 or thereabouts so I moved up to 7.095 and called CQ there. Replies came quickly including a summit to summit QSO with Peter, VK3PF, on VK3/VG-038. 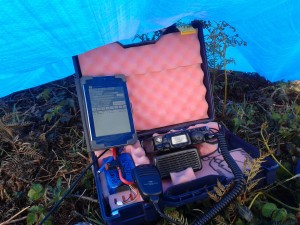 After 25 minutes and 17 QSOs on 40 metres I moved to 12 metres for the 12 metre challenge and picked up another two contacts there. I left the summit at 10:35 am and was back at the car 20 minutes later.

The next summit for the day was VK3/VT-040 Spion Kopje. In between Mt Beenak and Spion Kopje I was fortunate enough to work Ben VK3FTRV at VK3/VS-003 Oak Mountain and Peter VK3PF at VK3/VG-061 Mt Koolabbra to keep my chaser score ticking along.

Access to Spion Kopje was the same as my previous visit in 2012. Leaving the car at 11:50 am I headed up the overgrown and sometimes difficult to find track. 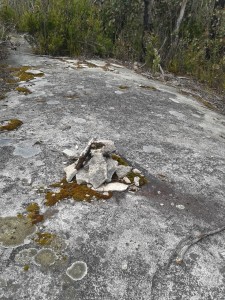 Not quite the peak

The track heads up through the trees, marked occasionally with blue tape on the trees or red paint on the rocks. Just before the summit is a large flat granite area marked in the centre by a small pile of rocks. This is a good spot to work from, and Marshal, VK3MRG and Wayne, VK3WAM have worked from here before. While it is well within the activation zone it’s not quite the top.

At the peak of the summit is a concrete obelisk like trig point with the four footings of the old fire spotting tower surrounding it. This area has much shattered plate glass presumably from the windows of the fire spotters cabin. Next time I head up I’ll take something to collect the glass and bring it down.

I strapped the squid pole to the nearest footing and strung the antenna out. 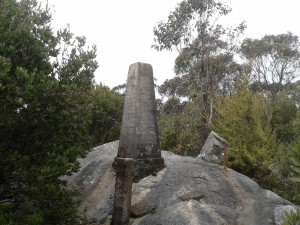 Trig point at the summit

Contacts on 40 metres came quickly with the summit qualified within the first 3 minutes on air. Again I worked all comers on 40 metres then switched to 12 metres. Here I got a very weak contact with Ron VK3AFW and 4 others. 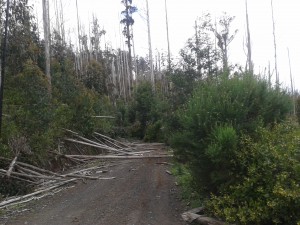 The last summit for the day was VK3/VT-059 South Hells Gate. I first visited South Hells Gate in September 2012 along with my daughter and we found South Hells Gate Track closed. Coming a little later in the year the track is open, but littered with fallen trees burnt in the Black Saturday fires in 2009.

I drove up and over the trees and parked about 500 metres from the summit at the 4WD parking area shown on the map here. The walk to the summit is quite steep and took about 15 minutes.

I hung the antenna in a tree and got on air just after 3 pm. There was an initial pile up with many stations calling, among them Mark, VK3FTRV on VK3/VW-007 Near Boroka Lookout. Another unexpected summit to summit QSO. I worked 25 stations on 40 metres then three QSOs on 12 metres. 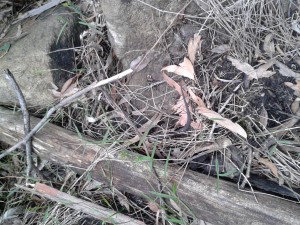 Black snake among the logs

Leaving the peak at 3:50 I made my way down the hill and back across the holed short cut between Robertson Creek Fireline and South Hells Gate Track. While negotiating the fallen trees I nearly stepped on a black snake slowly making its way between logs. A reminder that there are many different and varied dangers when hiking in the Australian bush.

From the car park I headed back down the track with the fallen trees and off home.

A successful day with three summits re-activated, 66 QSOs in the log including 10 contacts on 12 metres.

One Response to Three summits revisited