Last weekend I took a big step to improve my portable capabilities. After much thought and reflection about what would suit my type of operations, I decided to buy a Yaesu FT817ND. I had read a bit about them and nearly everyone I spoke to had many good things to say. The eHam product reviews are largely positive and the specifications suit back packing operations.

So on Saturday morning, armed with some hard earned cash, I wandered over to Bayswater and paid Strictly Ham a visit. Ross, the owner of Strictly Ham, is a friendly bloke who loves a chat and I found Greg, VK3LLL, had dropped in on his way to his JMFD site at Mt Donna Buang. 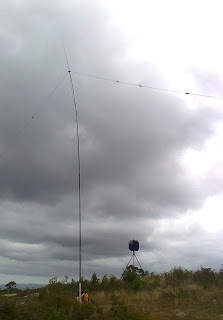 I chatted a bit with Ross, Ross and Greg and collected my new FT817ND. This is the first new rig I have purchased in 16 years and I couldn’t wait to try it out.

The John Moyle Memorial Field Day contest, JMFD, started at midday on Saturday and I was heading to activate SOTA VK3/VC-016 Mt Beenak and try my luck with QRP in the 6 hour HF section.

Mt Beenak is only accessible on foot with a walk of about 1.4 km on a sealed road. The path rises about 140 m from the locked gate to the summit.

Once on the top of the hill I found a suitable rock to fasten the base of the squid pole and set up the antenna. There is not really a lot on the top of this hill. There are some rocks, a few telco cabins, a couple of towers and a concrete pole. No trees, no table, no seats. 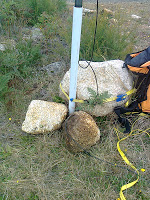 The JMFD contest is broken into 3 hour blocks allowing rework of stations in each block. The most effective way to work the 6 hour section is to start working halfway through one block and finish six hours later, halfway through a third block. This allows contacts with each station 3 times on each band thereby maximising one’s score. A critical decision is choosing which block to start and finish in. Starting too early means you may miss the traffic that comes on after dinner on the east coast and improved conditions on 40 & 80 m that come after dark. Starting too late means you finish talking to yourself as the east coast goes to bed.

After walking to the peak and setting up I got on air around 2:30 pm local. Starting out on 40 m I found the FT817ND was performing well and the QSO rate was as expected. It was a steep learning curve with this new radio given my first contact was about 45 seconds after I had turned the radio on for the first time.

The QSOs continued for the whole six hours with the only interruption of about 20 minutes while I read the manual to work out how to adjust the dial step of the VFO and put on my jacket and over pants. I also took this opportunity to add two ropes to the squid pole to stop it falling over.

At the end of six hours I had added 111 QSO to my log, all at 5 watts, and I was still on the first 7 Ah SLA battery. I was quite pleased with how the radio had performed with the only criticism was the seemingly poor adjacent channel rejection. It reminded me a lot of CB radios of the 1980’s era.

In the dark I packed away the gear using the dim glow of my headlamp and then walked back down the hill to the car. I had another SOTA off my list, a reasonable JMFD HF score and a beaut new radio.

I’m excited about where I will take this little gem next.

This entry was posted in Contesting, SOTA. Bookmark the permalink.