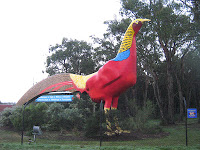 On Saturday I met up with Glenn, VK3YY out the front Gumbuya Park. Gumbuya Park is know to most people down this way as ‘that place with the big bird out front’. I had chosen to meet anyone who wanted to come along for the walk here because it is so well known. While I was waiting for Glenn six other cars arrived and I said to my daughter “gee that’s a lot of people to coming to hike a hill.” But as soon as they arrived they left and kept heading off down the highway. Glenn arrived soon after explaining that although he knew where he was going he had been misled by his GPS navigator and driven up the old highway which is now a dead end.
So along with Glenn and my daughter we headed off toward SOTA summit VK3/VC-028 Dingo Ridge. 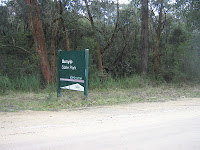 We drove along a couple of back roads from Gumbuya Park, into the Bunyip State Park and along to the junction of Tynong North Rd and Lupton Track. We parked the cars here, loaded up our back packs with radio and antenna and started our ascent.
The first 800 m of the track is the steepest part of the journey with quite some exertion needed to get to the top. A good section to get the heart beating. After this the track rises gently to the summit with an occasional dip. We didn’t notice the dips until the return trip. 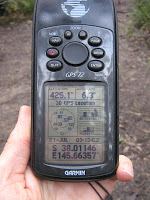 The Dingo Ridge summit is listed as being at -38.01120, 145.66379 and 425 metres above sea level. As Glenn and I hiked toward the top Glenn was using an app on his phone to work out where we had to go. We didn’t need help as the road up is pretty obvious. I knew the track would reach a peak then dip a little then peak again. We stopped near the top and I checked my GPS for an accurate indication if we were there yet. It was difficult to tell if we were at the top as there is no view at all. The area is surrounded by trees. My GPS said we had a few hundred metres to go so we kept going.
When we reached the junction of Lupton Track and Dingo Ridge Track I checked the GPS again and we were at the specified height, and within 30 metres of the SOTA point. Since this was also a good place to set antennas we stopped here and set up.
At the junction were two metal sign posts so Glenn set his squid pole vertical on one and I set my squid pole and linked inverted vee antenna on the other. We were both using FT817s.
Glenn started on 40 m and I started on 80 m. He made his first contact after about five minutes of calling, while it took me about 20 minutes and a self-spot before Allen VK3HRA popped up. Peter VK3PF followed Allen before I moved off to 20 m. I got another couple of regulars on 20 m then, after checking where Glenn was operating, I moved down to 40 m.
Here I made eight QSOs quite quickly including three VK3 stations. Other SOTA activators had reported that getting contacts from VK3 stations on 40 m was difficult in the past few weeks. I think this may have lots to do with the antennas in use. Many VK3 SOTA activators use vertical antennas with tuners whereas  I use an inverted vee giving a higher angle of radiation. My guess is most of my signal goes straight up and back down not too far away. Not much use for DX but great for local contacts.
After about two hours the weather looked like it was going to turn and start raining so we decided to pack up and head back down the hill. The temperature had dropped a few degrees so I hiked down wearing my windproof jacket and beanie. By the time we got halfway down the threat of rain had gone, we didn’t get wet, and I didn’t need the jacket. The beanie was gone even earlier.

At the end of the activation I had 12 QSOs in the log, Glenn had 5 QSOs including two SSB contacts on 30 m.

Once back at the cars we talked briefly about where would go next. We didn’t decide on anything so we’ll see what happens .

The walk up, activation and back took a bit over four hours and Glenn and I scored 1 point each.

Next up for me will be something worth a few more points than one I think!

73
This entry was posted in SOTA. Bookmark the permalink.