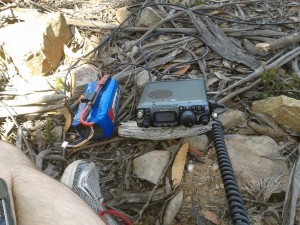 Last Sunday, 29 December 2013, I took my wife’s car for a drive in the hills and headed for the highest summit in the VK3 Central group, Mt Matlock VK3/VC-001.

Traveling via Warburton I arrived at Mt Matlock just before 11:00 am and drove to the top just to have a look around. I then drove well out of the activation zone and parked the car about 1 km from the summit. I was traveling light and loaded the radio, battery, antenna and throw weight into an over the shoulder laptop bag and headed back up. 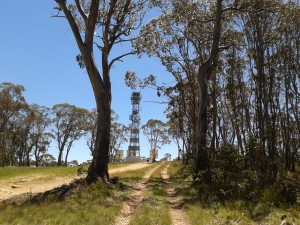 Access was easy and I set up about 100 metres from the fire spotters tower. I was on air about 11:40 am with my first contacts being Summit to Summit QSOs with Kevin VK3KAB and Trevor VK3ATB over at Trapyard Hill VK3/VT-005 on 40 metres. After working the usual chasers I tried 12 metres and worked 4 stations including Summit to Summit with Sam VK2AFA on One Tree Hill VK2/NT-013. I also made 3 QSOs on 20 metres. 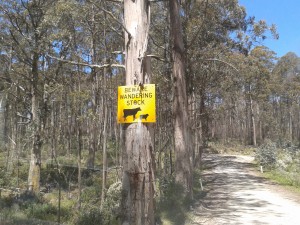 After finishing on Mt Matlock I checked the map for where I could head next. Mt Useful VK3/VT-016 is not too far away. There is a road between Matlock and Walhalla with Mt Sellma Rd turning off it. Although marked as Four Wheel Drive only the road is passable in the dry in a two wheel drive. Any sign of rain or snow however and I could see the road becoming very slippery and difficult to traverse.

I traveled past Mt Selma, having activated it just before Christmas, and headed on toward Mt Useful VK3/VT-016.

Cattle on road side

Near Mt Useful are signs warning of wandering stock. They are right, as I came across two herds of cattle grazing on the edge of the road way. Anyone traveling between Mt Selma and Mt Useful should take head of these signs.

I parked the car at the end of the Mt Useful access track and walked up, again setting up about 100 metres from the fire spotter’s tower. 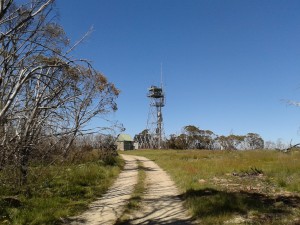 The trees in this area are quite low so my antenna was not the best. I still managed many QSOs on 40 m, 12 m and 20 metres including a Summit to Summit QSO with Bernard VK2IB at Mt McKay VK3/VE-007.