One of the drawbacks with the antenna system I took to French Island in 2010 was the time and effort to change the squid pole antenna from a 20m quad loop to a 40m ground plane. It takes about 15 minutes and that is 15 minutes more in the sun. If you need to change back then it is another 15 minutes. 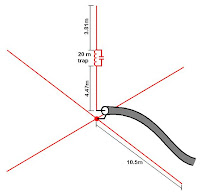 In January 2010 I trialed using a trap near the mid point of the main element to see if the antenna would tune and work on 20m as well as 40m. I was using my FT7 on a 7 Ah SLA battery sitting in the boot of the car.
Now, in theory this should work as I use the same principle on my 80/40/20m trapped dipole. Using one of the 20m traps from my dipole I tried a couple of wire lengths and settled on the dimensions shown above.
The trap is made with 42mm diameter PVC pipe with 9 turns of wire on it. In the middle of the pipe is a length of open ended coax acting as a capacitor. Photos of the trap under construction are below and details for making traps are here.
With the wire lengths shown and supported by my 9m squid pole, I got SWR less than 1.3:1 on 7.100 MHz and 14.200 MHz. 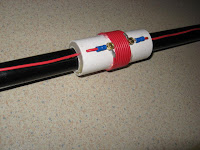 While checking the 20m SWR I heard a fairly strong signal near 14.300 MHz and, after checking my SWR was good, I tuned down and found Rick, VK2AAH, calling CQ. I answered his call and Rick came back to me with a 5 X 8 signal report into Sydney. Not a bad effort for a first contact with only 10 Watts. As the sky was getting a little dark and rain was coming along soon I didn’t talk long with Rick.
I gave the 40m band a quick look and heard Ray VK2FW calling another station. I listened and Ray called a second time. Still no answer. After his third call I called him and, after short introductions, he gave a 4 X 5 signal report. Not as good as my 20m report but I was still pleased to make a contact so quick.
By now I was starting to get wet so I signed with Ray, put on a rain coat, and packed the antenna away.
So, there we have it. A trapped vertical portable antenna for 40 and 20 m.
73