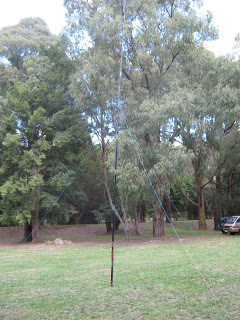 The F.A.R.T. camp last weekend was a great opportunity to try out some antennas as the site had plenty of space.

On the same site I had also set up my trapped 20/40 m ground plane on a 9 m squid pole and my 20/40/80 m trapped dipole in a tree at about 9 metres. With three antennas I was able to do some comparison between them.

This is consistent with my earlier trials.

In the next couple of weeks I will make the droopy ground plane more durable and publish some more photos.

I think I have found a new portable antenna for my award chasing on 20m. The droopy ground plane is a little harder to set up than the trapped 20/40 ground plane but the extra 3 S points could make all the difference.